Its been really busy in the shop this week, which is good because last week was very quiet.  Surprisingly we have had a lot of customers who are in the area on holiday.  Some have just come across us, and others knew we were here already.  Debby is still poorly, having had tonsillitos she now has a nasty ear infection which is giving her vertigo.  She has missed the arrival of the Christmas fabric, two big boxes.  I looked at them for about two hours because I just didn`t know where to put it all.  I finally pulled myself together and had a big sort out to make room for it.  I haven`t taken any photographs because the charge on my camera had run out, a bit like the charge in me by the time I had finished!  I am still amazed at how many people have been asking for it, and I`ve already sold quite a bit.  One husband today informed me how many weeks there were to Christmas, but I don`t want to think about it so have blanked it out, and will continue to do so until about half way through November, although of course I am happy to sell the fabric to anyone who wants to buy it!

I have decided this week to tell you all a little about Wellington and show you some photographs of our little town.  Apologies to anyone who lives here because you will know it all, and will certainly know what the town looks like, although I have to say my photographs do not do the town any justice at all.  We are amazed at how many people have found our blog from all over the UK, and this week, I had an email from Anne-Marie in Holland which caused great excitement, we are looking forward to meeting her when she comes over in August.

Wellington is a small market town.  Lots of the buildings are Georgian including our shop, which has a cellar that we don`t use.  Debby refuses to go down there, and I hate heights - if you saw the vertical steps down to it you would understand what I mean.  It has a beautiful 15th century church, and some rather substantial buildings some of  which are home to the four big banks.  Lloyds Bank used to be Foxes, and was the last private bank in England to issue their own bank notes - what a claim to fame.  There used to be several woollen mills in the town including Foxes which is still there albeit on a much smaller scale.  Foxes make wonderful woollen fabrics, and you can go to the factory shop to buy them.  A group of my friends have just completed a quilt made of the fabric, which has gone to the NEC for the quilt show, so look out for it.  Debby Meaden from Dragons Den has recently become involved with the factory which has in recent years had financial problems.  Our accountant has her offices in the old Counting House on the factory site, which I just love.  Relyon beds also have a factory in the town.

I am sure most of you have heard of the Duke of Wellington, and apparently he took his name from the town, but I have no idea why.  We have a small museum over the road from us, and one day I will hopefully find the time to go over and find out the answer.

Because it is a small market town, there are not lots of multi national`s on the High Street, apart from the usual W H Smiths, Boots, Superdrug, plus a small Co-op.  There is a small Waitrose in the town, which I know brings people into town.  Most of the shops however are small independents.  There are quite a few empty shops like most High Streets these days,  in fact we have one next to us, and just a couple of doors away there is a large unit which used to be Woolworths.  However, there is a new curtain shop opening next month, and there have been others since we have been there. 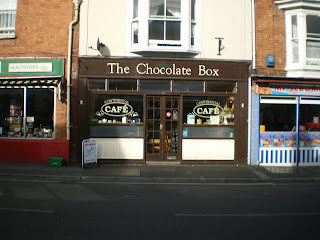 This is our favourite coffee shop.  Unfortunately Martina who owns it is leaving to go and live in Monaco (have I spelt that right?)  She has been so kind to us since we opened the shop and we shall really miss her.  We have met Tracey who has bought the business from her and she intends to carry on the way it is now, so Debby will be able to have her coffee with soya milk, and I can still treat myself to Tiffin! 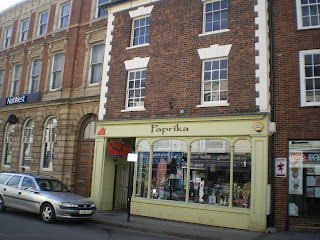 This shop is Paprika and is almost opposite us.  They sell lovely gifts, most of them Fair Trade.  There is another very good gift shop round the corner opposite the Chocolate Box called Frame of Mind, but the photograph I took was so terrible it could not go in this blog!  To the left is our bank, which is great, because we can see when the doors open in the morning and close in the afternoon.  We can also see what the queue is like inside, so can time our visits so we don`t have to queue 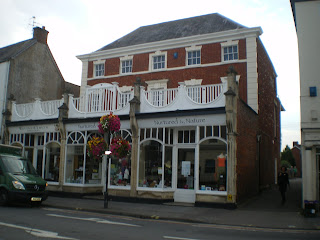 This is such a lovely building I couldn` leave it out.  To the left is the opticians, but the rest is a shop called Nurtered by Nature. which sells all sorts of things, lot of Fair Trade again, clothes cosmetics, world music, just to name a few. 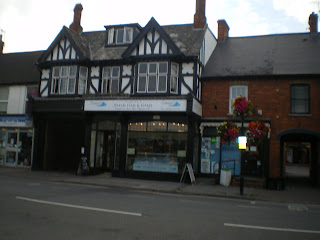 I have included this picture because it is the Fishmongers.  Last year there was a programme on BBC3 called the Young Fishmonger of the year, and the man that owns the shop either came first of second, I can`t remember which, but people come from all over the place to shop there. 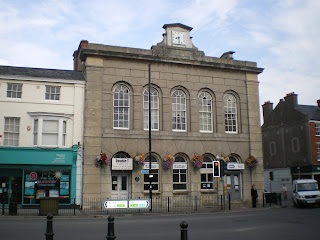 This building used to be the Town Offices (I think) but it is looking rather sad now, and although there are retail units in it, most of them are empty.  It`s a pity because its a nice building. 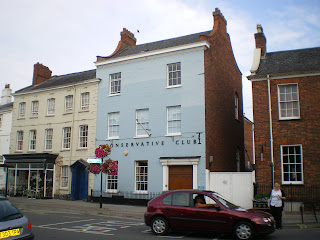 I have included this building just because I like it!  I`m not sure if it is still the Conservative Club.  Next to it on the left is The Garden Cafe. 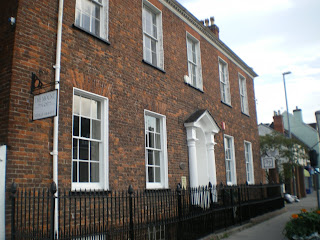 This lovely brick building is to the right of the Conservative Club and again I think it is a beautiful building.  It is a hairdressers at the moment, and in the basement there is a bar, which I am told is very good, but I am never in Wellington in the evening, so I have yet to find out. 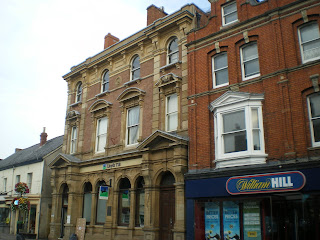 This isn`t a great photograph, and in fact it was bin day, so there is rubbish outside the bank, but this is Lloyds which I mentioned earlier.  A bit further on  the left is a fantastic ironmongers called Perrys which sells everything you can think of.  You don`t find many shops like it any more.  I asked the other day if they sharpened scissors, and they had someone that they send them to. 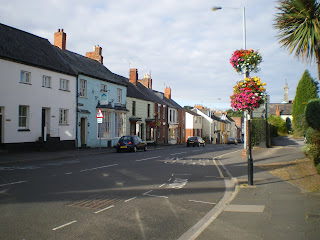 This road is a bit further along from Dotty Dolly and is the road out of town heading South.  the blue building on the left used to be a pub, but is now a Bed and Breakfast.

I could have taken lots more photographs, but lots of places were having deliveries and the lorries were in the way.  You may have noticed that there is very little traffic, this is rush hour in Wellington or 8.30am at any rate!   It is also the first week of the school holidays.   One shop I wanted to show you was the butchers.  I wanted to take a photograph of the sign above the shop - Tim Potter, son and daughter.  They really do all work in there, and I believe Mrs. Potter does the paperwork.  It`s a great butchers and there are always queues.  They know where all the meat has come from, and they have been known to deliver to me when they haven`t got it ready when I go in early in the morning.

There are three shoe shops none of which I have photographed, an artisan bakers and a fantastic cheese and wine shop - called you have guessed it The Cheese and Wine Shop.  There is also a good little Bookshop, and several excellent Charity Shops and Steptoes as everyone calls it.  Basically they do house clearances amongst other things, and we watch people all day with their purchases going past our shop,including sofas and beds.  Haberdashery Plus is another of our favourites, .Beryl who owns it sells practically anything you can think of in the Haberdashery line,  and very little of it is pre-packed.  She also sells flowers which are always outside the shop - her son has a nursery, but best of all free range eggs which are from her grandson`s hens.  He marks in pencil the day the eggs were laid, and they are delicious.  Oh and I nearly forgot to mention her homemade jam!

Finally I must mention our landlords Helen and Jim who own the newsagents next door.  They are getting quite a reputation for the large range of craft magazines they sell.  I try to stop Debby going in when the Austrialian magazines arrive, but it`s to no avail, I think she has built in radar

Thats it for another week.  It would be so nice if you left a comment.  I know lots of people read this, but sometimes we feel like we are writing it for ourselves.  It`s always lovely when people come into the shop and comment on something they have read on the blog, but it would be even better if they left a comment!

Have a good week.