The South West has woken up yet again to flooding.  I have just had a telephone call from Debby to say she can't get to the shop on the A38, so will have to go on the motorway, but everybody else wants to go that way and it's taking her forever.  According to the weather forecast it was supposed to be sunny today, and the weather forecast tells me that it will be sunny this afternoon, I will believe that when it happens

On a happier note, we had our first workshop at the lovely Nynehead Court on Saturday.  What a lovely location it was.  It was held in the Orangery, which was a beautiful light space and very warm!  I was slightly worried that it might be a bit cold, so wore lots of layers, that was a big mistake, I was  peeling off layers all day! 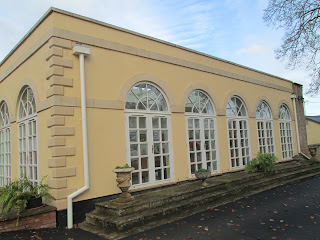 This is the orangery, the photograph does not do it any justice at all!  Nynehead Court is just outside Wellington and is a nursing home, with assisted living.  Apart from the main house there are several mews type cottages in the grounds.  The grounds are amazing and they often have Sunday walks round them with the Head Gardener, in fact there is one next Sunday.  The Orangery is used for lots of social events.  A couple of weeks ago they had a breakfast to raise money for Wellington Youth Centre, and the night before we were there they had had a Cheese and Wine Tasting - all very civilised! 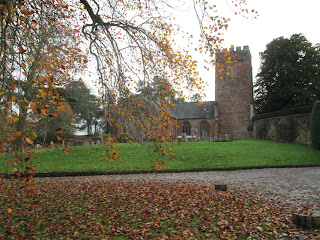 This is the view we had from the Orangery of the Church.  The church is rather large for such a small village, so there must have been quite a lot of money at some time.  The branches hide a beautiful rose window, which is not something you see very often on village churches. 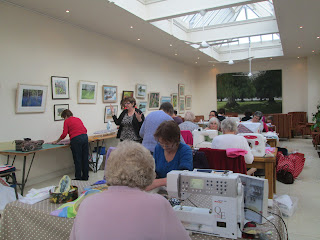 This is the view inside the Orangery.  The facilities were really good.  Again my photograph doesn't really do it much justice, but everyone said what a great venue it was, so we will hopefully start to use it in the future. 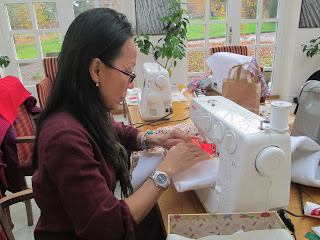 This is a phtograph of Tip working hard on her bucket bag.  Tip we discovered is the most amazing cook.  She brought lemon drizzle cake and biscuits for everyone.  The lemon drizzle cake was the nicest one I have ever eaten, she tells me the secret is in the amount of lemons she uses, no less than three.  Her biscuits were lovely little flower shapes drizzled with icing and presented so nicely in a cookie jar complete with gingham trim.  I overheard her telling someone that there was to be a weddding reception in the Orangery in a few weeks time and she was making the desserts.  If the lemon drizzle cake is anything to go by, lucky them!

Apart from the lovely venue and the amazing cakes, there was a lot of work completed, and everyone expressed their satisfaction with the day.  Unfortunately in my usual efficient way I failed to take any photographs of completed projects.

I have been working hard this week on Chritstmas orders and presents.  I have managed to get a lot of things done, but not completed, and I am feeling quite pleased with myself.   Debby has been very busy in the shop, although in view of the weather not too busy today I suspect.

I am now going to clean my kitchen floor and then take myself off to my workroom to carry on sewing.

Despite all my good intentions it is a couple of weeks since my last post, so today is blog day.  I am writing this in the shop, so it will probably take me all day to complete it, but complete it I will.

The first thing I want to show you is this lovely fabric.  I can't quite make my mind up if the deer fabric would be suitable for Christmas, given that every shop I go into a present seems to have a cushion with a reindeer on it!  However, I am not sure about the colour.  It would look great any time of the year, and I especially like the birds.  My daughter Katie has browns in her sitting room and has just bought some green accessories, so I will be making some cushions for her from it.  I will probably put wadding behind and quilt a little just to give it a bit more body.  The fabric is by Moda and part of the oh deer! range. 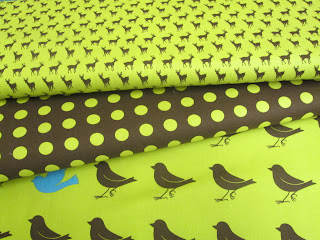 I love the odd blue bird, but wish they had done the same with the deer and the spots.

Debby and I have a Christmas Workshop next week at Nynehead Court.  This is a new venue for us, but it is a larger space, and so many people wanted to do the workshop that we thought we would try it out.  We have been busy making samples - 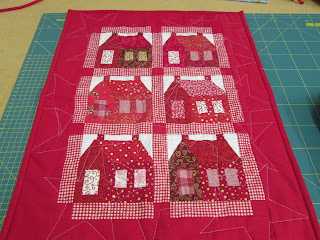 This is Debby' wall hanging, she used up lots of her red scraps.  You could quite easily just make one and turn it into a cushion of a smaller wall hanging.  You could also embroider Happy Christmas, or similar round the edges. 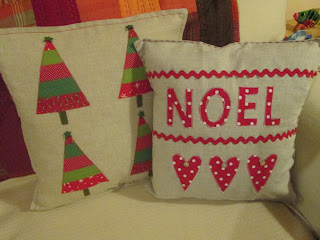 If you have been reading the blog for a while you may remember the Christmas tree cushion from last year, the Noel cushion is new for this year.  It is very simple, but effective with just the linen and red spot. 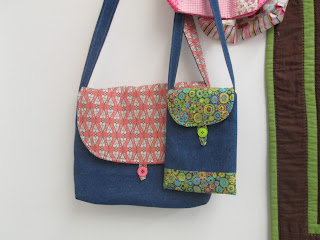 I am always trying to come up with new ideas for bags.  I have been making the smaller version for quite a few years, but decided to make a larger one, which was quite successful.  They are made from denim but with a contrast fabric for the flap. 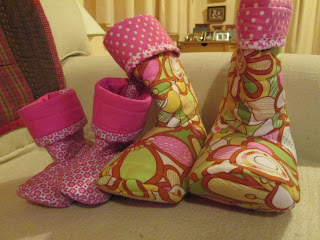 I made the larger of these slippers in the summer, but made the smaller ones last week.  I wish I could say that they were my pattern, but they are not.  Unfortunately I can't remember the name of the book I got them from.  I posted a picture of them on facebook a few nights ago, and the response was really good. 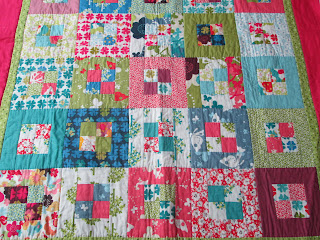 Debby is off for a fortnight although she can't seem to keep away, she has popped in a couple of times so far!  She has not gone away, but has told me she is spending the week sewing.  She is putting a quilt together with some new fabric by Moda, which we will show you as soon as it is completed.  I have been quilting this quilt which I have nearly completed, then it just needs the binding on it.  The backing is a large blue spot, and I will bind it with the same.  It is a pattern that Anne Baxter runs workshops on, made from a layer cake.

I have been busy cutting for Christmas presents.  Unfortunately cutting is as far as it has got so far, but I will let you see what I have made eventually!

There have been some grey days so far this November, but today the sun is shining.  Sometimes when I get the bus to Wellington I get here early.  I decided I would try to get to know Wellington a little better, and get fit at the same time by walking.  My plan is to walk at least a couple of mornings before I need to open the shop, even it it only means getting off the bus a couple of stops earlier!  This week I discovered the park.  My son worked over here for the local council during the summer holidays when he was a university, and has told me so many times I should take a look, so now I have.  It was lovely, especially so early in the morning.  It was funded by the Fox family in the early 20th century.  I am not sure if I have mentioned them before, but the Fox family were Quakers, and owned the local mill, along with another one at Uffculme(I hope I have got that right) called Coldharbour Mill now a museum. The Wellington factory is still open on a very small scale.  They make the most beautiful soft woolen fabric.  Deborah Meaden  of the Dragons Den has taken an interest in at as they were in trouble recently.  Most of the old mill is now empty, but it is a lovely old building.  I am finding as I walk around there are some really interesting buildings which you just don't notice when you are in the car.  That said, yesterday's walk was not so good I ended up walking through housing estates, but at least I know they are there now!

Earlier in the week one of the local community Police Support Officers came into the shop and said he had a photograph he wanted to show me.  I immediately thought there was some kind of problem and he was going to show me someone he would want me to identify.  However, he pulled out his phone and proceeded to show me a picture of a cushion his wife had made, her first attempt at patchwork!  It was great by the way.  It is so nice when people take the trouble to show you what they have made.

I think that's all the news for now - happy sewing!