Debby has had this week off work.  It was supposed to be time to make up for being so poorly when she was on leave, but although she is a bit better, she is still not right - ill I mean!  The doctor has given her some different medication which has taken away the sickness, but she still feels funny walking.  Hopefully it will go away soon.

I have decided this week to show you some fabric.  At times I worry that if we show you too much, you will all just think we are trying to sell it to you, which of course we are, but don`t want to put you off or bore you!  However, one of the blogs I follow called Freda`s Hive has a Fabric Friday every week.  She doesn`t sell fabric, but just shows you what she has, often with different themes.  She must have loads, because each week she shows lots and lots, and I love most of them.  I always enjoy is, so thought I would show you a couple of my favourite fabrics, but only a couple! 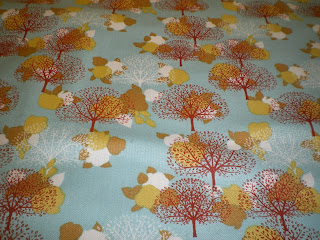 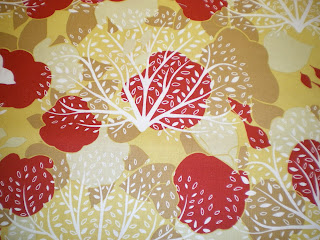 These are part of a collection of trees.  The collection is called Lovely Orchard and is designed by Suling Wang for Camelot Cottons.  When Debby and I ordered this we thought it would just fly out of the shop, but it doesn`t sell very well.  We have moved it around the shop, I have made things out of it, lots of people comment on it, but still it doesn`t sell!  However, I love it. 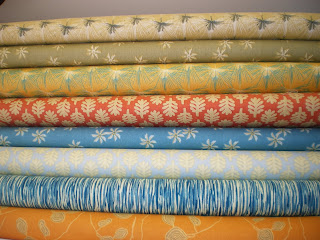 This collection is called Woodland by Lori Mason for RJR.  This is slightly more popular than Lovely Orchard, but again hasn`t sold as well as we thought it would.  I think it has quite a Japanese feel to it, and I love the colours.  Perhaps my taste isn`t as good as I thought it was!

We have had a new delivery from Makower this week, which  I think has a shabby chic feel to it.  We have some rather nice stripe fabric which looks like ticking, and some of these would look really good appliqued on to it. 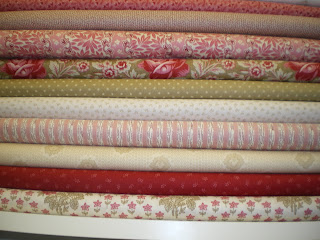 We have also taken delivery of some apron panels ready to cut out which were featured in Sew Hip recently.

Enough about fabric or I will be in danger of sounding like an advertisement.  Last week we had another Beginner`s Workshop, and once again everyone produced a lovely piece of work.  I didn`t taken any photographs this week, but it amazes me how different the cushions can look in all the different fabrics.  This time we had bright, traditional and quirky.  Everyone coped with putting in a zip, something which scares a lot of people, but which I think makes such a difference to the finish.

We heard this week that Anne Baxter who teaches on quite a few of our classes had a stroke last week.  She is OK, but has to rest.  She is a lovely lady and very popular with everyone, so we hope she gets better soon.
We are re-jigging our workshop programme and changing a few dates and themes, while she is getting better, so will send the September - December list out as soon as we can.

Toni, one our regular customers, organises craft fairs.  She is very particular about only selling things that people have made themselves. I don`t know about you, but |I get fed up of going to fairs, and then find that half the items for sale have been  imported.  If anyone is interested in taking a stand at any of her fairs, if you would like to contact us then we will put you in touch with her.  She was telling me today that her partner has put up a large shed for her to use as a workroom.  She was going home today to start painting the inside and telling me all her plans for it - I am very envious, I have always fancied a shed to work in - very Country Living, except mine would end up looking like a pig sty in about a week, but at least I could close the door on it and leave all the mess at the bottom of the garden!

It`s interesting how other people work, Shirley from Stitcherydo has just completed a workroom in her spare room, which looked too tidy for my liking, but she tells me it won`t stay like that.  Another blogger that I follow, Comfort Stitching does her stitching in her sitting room quite often sitting on her sofa at the coffee table.  I really could not do that, but then I am lucky that I have a room to sew, and another room to put all my stuff in, but rest assured you will not be seeing any photographs of either of them.  I am deeply ashamed of both, but particularly the room where everything is stored.  If my mum was ever allowed to see it she would be very ashamed of me.  Debby tut tuts at me when she is in the shop, but I have to say she is just as bad as me, and I tut tut at her, we are both as bad as each other.  Once a year I have a really good sort out, and tell myself everything will go back exactly where it came from, and it will not get in a mess.  This lasts a few weeks, and then I revert to type.  Another of our customers Sandy told me this week that she has sorted out her spare room and has space for her sewing machine and a cutting table, but puts the ironing board up downstairs in the kitchen so that every time she wants to press anything she has to go downstairs, but tells me the exercise does her good!

Thats it for another week.  I have a few days off as my daughter is coming with the children,  although I will still be at our classes.  Hopefully Debby will be better, and we hope that Anne is on the mend.