Debby is slowly getting better, but still can`t walk in a straight line, and is having to keep on the medication to stop her from feeling sick.  I was so concerned about her that I took the week off!  I did turn up for the Wednesday night class at West Buckland, and also took my usual class at Rockwell Green on Thursday morning,  but apart from that you couldn`t see me for dust.  I think I might have said that my daughter was coming down with the grandchildren on the Wednesday, and of course I started to come down with a cold, she was recovering from a horrible virus which came back to haunt her for a couple of days, so it served me right really.  Despite the fact that we felt a bit rough for a couple of days and it rained, we still managed to have a good time.  We went up to the Quantocks on Friday and had a lovely picnic which we had just finished when it started to rain again.  We decided to go over to Nether Stowey, I have lived in Taunton since the 1970`s and never been, and was very pleasantly surprised there are some beautiful old buildings, which is why I suppose it was made a conservation area.  We were really just killing time until our picnic had settled down so we could go over to The Stables at Triscombe for a cream tea.  If you have never been there, and get the chance you must go.  The sun was shining,  the views are great, we sat in the garden and stuffed ourselves with scones, clotted cream and jam - what more could you want!

On Sunday we took ourselves off for another picnic this time to Wimbleball Reservoir near Wiveliscombe.  Its a lovely place, there is a 9 mile walk around the reservoir which we obviously didn`t do, but which I have in the past, and to tell you the truth, I am amazed I lived to tell the tale!  There`s  lots of space to picnic and run around, sailing on the reservoir, a fantastic play area, lovely woodland walks, and of course toilets!  Georgia my grandaughter was in her element along with grandad, but Charlie at 3 months was rather more laid back about the whole affair. Their dad was in Amsterdam, and no he wasn`t on a stag `do` as everyone thought, but actually taking part in a world championship athletic meeting in which he was competing in a double decathlon - I mean how mad do you have to be to do that!  He got off to an amazing start by winning his first race, the 100 metres, but unfortunately he went downhill after that.  He went with a friend who has spent the last five years taking part in any world championship that he can.  He has been all around the country and had a great time and attended various championships such as crazy golf, nettle eating,and snail racing to name but a few.  I`ve no idea why he did it, but this weekend was the last one he is going to do.  I gather they were absolutely shattered at the end of the three days, but pleased that they completed all events.  I have yet to hear where they were placed. 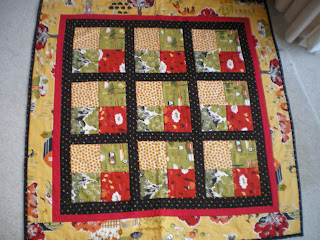 As you can imagine I didn`t get much sewing done last week, so need to get down to some serious sewing this week.  I had made two dresses for Georgia, but needless to say forgot to take any photographs of them.  She was very pleased with them, and trust me, if she didn`t like them she would have told me.  I had also made Charlie a little quilt/mat which I was rather pleased with.  I used the new Moda Farmyard fabric which I showed you a few weeks ago.  I took this photograph about 7.00am this morning, and my only excuse is I had just got up, I hadn`t even had a cup of tea, and John my husband had kept me awake for most of the night because he was coming down with the lurgy. It actually looks a lot nicer and brighter than the photograph.  It has already been christened, and I can tell you it washes well! 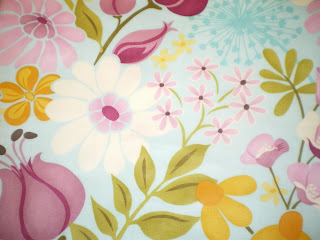 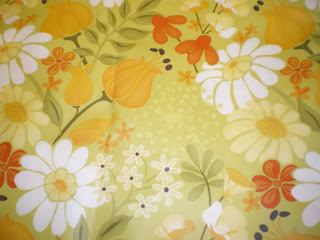 Although Debby wasn`t on top form last week it didn`t stop her buying some more fabric, Alan our Moda rep paid a visit and she bought two rolls of rather nice coated cotton, it isn`t really oil cloth, but it looks like it is, its much softer and easier to stitch.  I had a go at making a bag this afternoon just to see what it stitched like and I was quite pleased with the results, especially as the machine we have in the shop is quite old and can be quite tempermental at times. 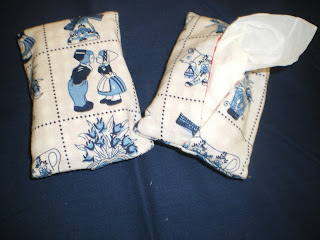 .Last week we had a visit from Anne Marie from Holland, I was so disappointed that I missed her, especially as she had brought over a little gift for us both.  It was so kind of her, and we just love the fabric, it`s so Dutch!  They are lined with a red check, and its just what I need to put my tissues in, in my handbag, so thank you Anne Marie, and I hope you had a great holiday.

We had a visit today from a lovely lady from Dorchester, who came over especially, and another from Nottingham who was a lace maker, both found us on the internet which is always great to hear.  Its always very exciting when people have come some distance, especially when they say they will be back!

Debby and I plan to finally send out our workshop list this week.  We have had to re-arrange it slightly because of Anne`s illness.  Apologies if you have been waiting for it, but it is on it`s way.

Hope you all have a good week.