I can`t believe it is nearly two weeks since I wrote.  Debby is probably back from holiday, although I haven`t spoken to her yet.  Its been a hectic couple of weeks with lots going on, and of course I have felt very importants being in charge.  Trade is picking up with lots of people buying Christmas fabrics, or fabric to make Christmas presents, some have even bought fabric to give as Christmas gifts!

Last Friday I was asked to go and run a workshop for Apple County Quilters.  If you don`t already know, this group of ladies are very accomplished, and to say I was nervous is a slight understatement.  We had agreed that I would take a Christmas angel, a couple of Christmas wall hangings and cushions.  The group meet in a lovely hall out at Bradford on Tone, and it was so nice to get out of the shop for a day.  In the event I had a very enjoyable day and met some lovely people, who made me feel very welcome.  Hopefully they all enjoyed themselves as much as I did. Some finished, but most had a little more to do - I`m looking forward to seeing the finished results.  Sue very kindly popped to the shop yesterday with a gift for me beautifully wrapped in red dotty paper with a letter thanking me.  Inside was not one, but two boxes of chocolates!  I have to say I have left one in the shop and opened them, unfortunately every time I go out the back where they are they say to me `eat me, eat me`, and of course I do - oh dear! 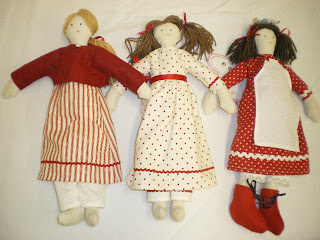 The angel on the right was the angel I orginally made for my grandaughter which was a huge success with her, and the other two were slightly more refined.  Somehow or other they didn`t look right with the felt shoes, so I left them off.  I have a couple more ideas for them but just haven`t had enough time - nothing new there then.

I had a customer in the shop yesterday who I thought I recognised.  When I got talking to her Debby and I had met her at Malvern, she was from Newport in Wales.  She was down in Somerset with her husband who was going on a glass making course near Honiton and she popped in.  While talking to her is turned out she was a longarm quilter.  Her husband popped to the car and brought back some photographs of her work which was fantastic.  So if anyone wants some quilting done then contact us and we will give you Sue`s details.  It always impresses me when husbands come in the shop and show interest and enthusiasm, and positively encourage their wives to spend money - this just wouldn`t happen to me!  It was so nice to see her again, and quite reassuring that people do remember you from the shows, and come and find you!

Earlier this week my husband gave me a lift to the shop and said to me that he usually really liked our window displays, but this time it looked like an old lady`s shop.  I was rather put out by this as you can imagine, I kind of knew what he was trying to say, but I didn`t agree with him.  One window had our wonderful selection of felt in it, and the other our new kits which I was rather pleased with.  However, I began to panic and thought well if he thinks that other people probably do as well, so I got the sewing machine out and started on some Christmas cushions which are now in one of the windows. 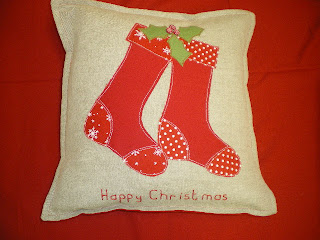 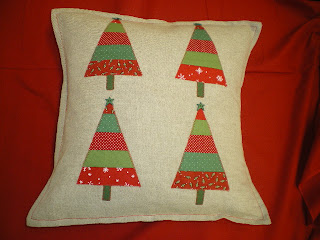 I was particulary pleased with the Christmas tree cushion.  I just stitched some strips together and then cut them into triangles and appliqued them on to linen.  I finished them with a little trunk and a green star button. To save on the linen, I made the back in red cotton.  We have just got in the star shaped buttons and they are selling really well.  The felt is still in the other window, but to be honest I don`t know where to put it all when it does come out of the window, and I need to come up with another Christmas themed window.  That said Debby is the Christmas diva, and no doubt within a week or so, it will be all singing and dancing with glitter, lights and goodness knows what else!

There is a lot going on in Wellington for Christmas.  For the first time the town is going to have late night shopping on the two Wednesdays and Sundays before Christmas, and the council is providing free parking on Saturdays in December.  Sam from Cloud 9 is the driving force behind this, I don`t know where she gets her energy from, but she has worked tirelessly the last few weeks organising entertainment and getting all the local traders on board.  We can`t compete with Taunton, but there are some lovely individual shops in the town, so if you fancy doing some Christmas shopping in a more relaxed atmosphere come on over to Wellington! 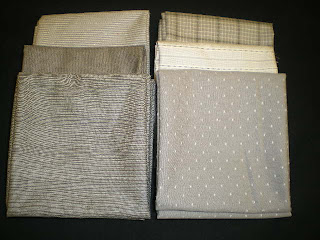 We had a delivery of some Moda woven fabrics today in a range of mostly greys, but a little red.  They are beautiful fabrics that almost feel like silk.   I attempted to take a photograph of some of them, but it wasn`t a huge success, but I will show them anyway.  My mind started working overtime whilst cutting the fat quarters, and I think they would look really good with just a touch of shocking pink.