It`s a while since we have posted a blog, even my dad asked when the next one would be!  Debby and I have been busy, busy.  Poor old Debby has been getting the accounts ready which is quite a task, she is much better at that kind of thing than me, but I have felt guilty because she has had all the horrible stuff to do while I have been sewing.

The shop has been busy, we have found it quite interesting that we are not selling readymade items like we did last year.  Customers are wanting to have a go themselves, or are buying fabric for friends who like to sew.  We have had several wish lists for husbands, and they have all been very dutiful!  Lots of people have been watching Kirsty`s Homemade Christmas and wanting to make what they have seen her making, particularly the hearts, she is now known as St. Kirsty!  We have sold out of the new roll of Fuse-a-Web which would normally have lasted a couple of months, and unfortunately we didn`t have any bells - if you watched the programme you will understand what I am talking about! 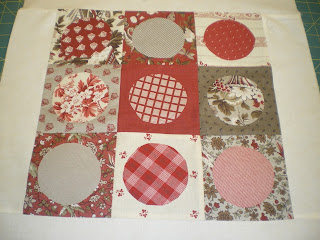 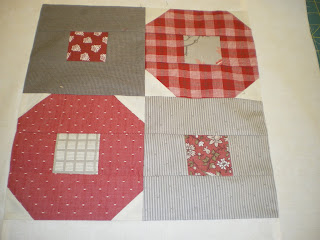 We have been organising our workshop list for the beginning of next year, but it has proved very problematic, and we haven`t managed to send it yet.  We had hoped to do it up to April, but every date we want in April is not available at our usual venue, so we have been trying to find somewhere else.  Debby is hopefully going to finalise it today and get the list sent out - fingers crossed.  We have been busy working on samples and trying to sort out what we are going to do.  I will be doing another Beginner`s Course, and this time have decided to do a set of  cushions.  I have started to put them together , but I have quite a lot of quilting to do yet, as you can see from above.  I need to stitch the circles, and can`t make up my mind to do it by hand or machine.  I have used some of the new Moda Etchings Wovens from 3 sisters, plus a charm pack of Panier de Fleurs by French General, with a couple of others thrown in for good measure.  The one below I will do by machine. They would go in my sitting room beautifully, and I am rather fed up with the cushions I have at present, so the may end up there! There are two others, but I have a little way to go with them yet. 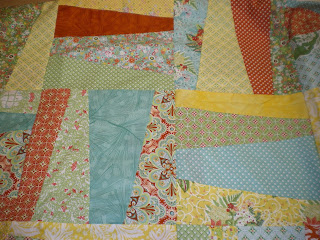 Debby who is now the Jelly Roll Queen, is going to do a workshop on Layer Cakes, she has a few ideas up her sleeve, but I thought I would have a go.  There seems to be lots of patterns out there for Jelly Rolls, but the Layer Cakes always seem more difficult to find.  The one I have done is really easy.  I thought I liked the Layer Cake I used, until I started to make it!  The top is completed so I just need to get it ready to quilt, which I aim to do during the Christmas Break.

We will be closing at 12 noon tomorrow, and will re-open on Tuesday 3rd January, giving us both some time to re-charge our batteries.  We hope you all have a great Christmas and don`t spend too much time in the kitchen unless you want to!
Posted by Dotty Dolly at 10:42