I have had a fairly uneventful couple of weeks.  We all got through Easter and now feel about a stone heavier!
Debby was working last week, although I did go into the shop on Friday while she was doing a workshop with a seaside theme.  No photographs I am afraid, but she is bringing in the samples to go in the window, so I will take some then as I thought they were great.  I did go to Wellington on Saturday morning to do some shopping.  It was very nice being a customer instead of a shop assistant!  I went with my friend Jenny who does not stitch and I think she thinks I am rather peculiar at times although she does say if anyone is going to encourage her to sew it would be me - I have seen her sewing basket and trust me it`s never going to happen.  We both managed to find some new clothes to spend our money on, and paid a visit to the Old Sale Rooms which have re-opened as a vintage/antique shop along with a very nice tea room.  It was good to see so many people in there.

Back to the shop for me this week.  We have now sent out details of our new workshops and so there is now the panice to start making the samples. 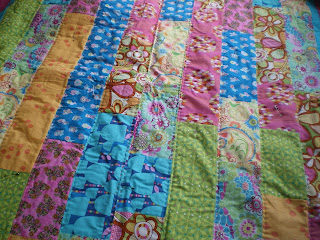 I started last week by putting together a very bright quilt made in strips.  This is for my first Beginner`s Workshop.  I decided to use some of the brighter fabrics we have, but am now thinking perhaps it is too bright and that it might put some people off, so  have now cut out a blue one with narrower strips which are much more subdued.  I still prefer the bright one.  I have started to quilt it by hand with perle threads, but there is a long way to go yet. 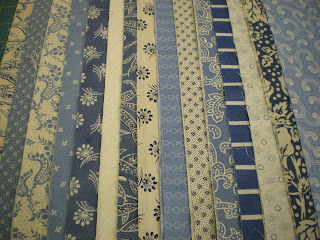 I won`t cut up the strips like I did in the other one, and they are half the width.  I have only got as far as cutting, but hope to start putting the top together later in the week.

Yesterday I decided we needed to have a Jubilee window so set to work on making some bunting and a couple of cushions.  I showed you some of the fabric we have a couple of weeks ago, but it`s no good having fabric for the jubilee and olympics and putting it in the window when its all happening and too late! 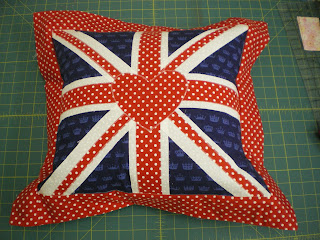 I was quite pleased with the union jack cushion, but  I have a confession to make, I appliqued it rather than foundation pieced it.  The big heart in the middle is to hide a mistake I made, but I decided afterwards that it finishes it off rather nicely.  Anne Baxter is doing a workshop for us tomorrow on a shabby chic union jack cushion and its beautiful.  Mine would not compare very well I am afraid, but it does look good in the window.  We have been lent a lovely old singer sewing machine which is also part of our window display.

Last week when I was off I felt like doing some dressmaking and made up this dress and matching bag to go in the other window.  I was rather pleased with it. 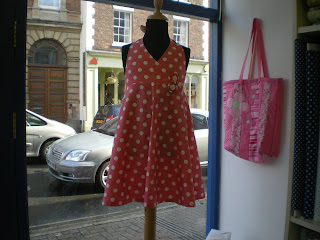 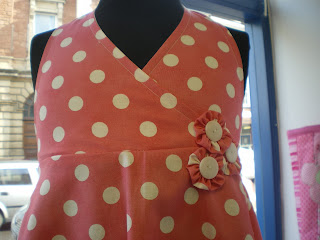 Finally I made a little bag to go with it again finished off with the suffolk puffs. 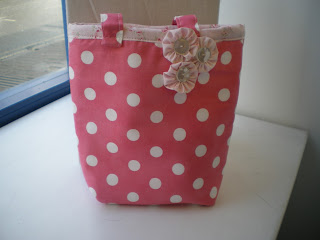 I now have to start thinking about the rest of the workshops.  I have bags to make and I am also doing a gift day which should be interesting!  Debby is going to be making a quilt based on court steps and she is also doing a dollies and houses workshop, to name but a few - watch this space.