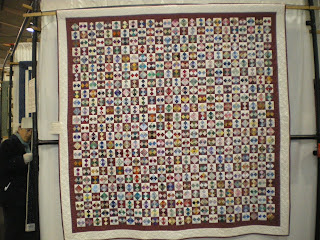 Well we survived Westpoint.  We were obviously more organised than I thought in the last blog, as we did get everything in the two cars, and didn`t forget anything!  Westpoint was definately quieter than last year.  The weather was lovely the whole weekend, and I don`t think the petrol situation helped.  In fact we tried to get petrol before we left on Friday, but couldn`t and of course the red light went on on the motorway.  Debby went into panic mode having once run out of petrol in the dark in the middle of nowhere.  We managed to get some at Exeter, so the panic was over, but it was a worry.  Despite all this we had a good show, and it was lovely to see so many customers old and new.  You never know what you are going to sell, on the first day we sold so many jelly rolls and layer cakes we were worried we were going to run out, so took more back on Saturday, and guess what, we hardly sold any!  I managed to have a look at the quilts and photographed some for you to see.  Unfortunately I didn`t have time to take any details, so you will just have to enjoy them. 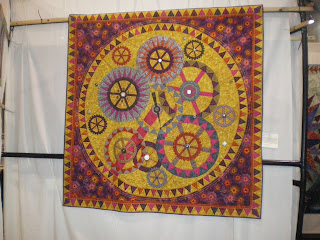 The first one right at the top of the page was made of lots of tiny pieces, I think the maker said there were over 4,000, that really is a labour of love!  I loved the colours of the yellowy one immediately above and it was beautifully pieced. 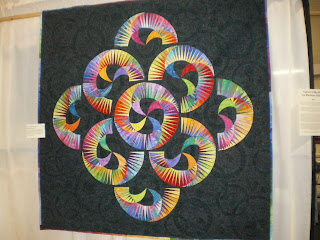 Again another beautifully pieced quilt, the photgraph doesn`t really do it any justice.  I have nothing but admiration for people who attempt this kind of piecing and make such a good job of it! 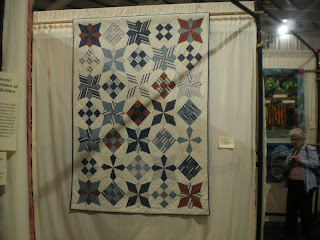 Finally I photographed this one - not very well - simply because I liked the colours.

I drew the short straw this week, because it was my turn to work in the shop and therefore put everything away!  Chris, Debby`s husband had dropped most of it off for us, and put it all at the back, and it really didn`t take me very long at all, I am quite impressed at just how organised we are getting.  I was surprised to see Debby in the shop later in the day, she had popped over to drop a couple of things off, but kept coming back to show me what she had bought!  A little gallery has been open for the week next to us in an empty shop, and Debby bought a really lovely little piece, it`s hard to describe, because it was partly photograph, but mixed in with mixed media on glass.  Chris was debating whether to buy a picture of some birds which was quite expensive and Debby was trying to persuade him not to, which I thought was a bit mean as she had just bought one she liked!  She later came back with a gorgeous top from a new clothes shop that has opened called Snob.  They have some great stock, and eventually when I am not in the shop I will pop over, because every time I walk past I drool over the window display.  Unfortunately their hours are the same as ours so it makes it rather difficult.  There are two new clothes shops in Wellington and they both seem to be rather good, and another one is opening later this month.   The fish shop closed this week which is a great shame, although they are continuing to trade at the Farm Shop at Rumwell.  The Mary Portas bid has gone in, but there is such a lot of competition.  We get quite frustrated that more people don`t realise what a lovely little place it is to come and shop.