I am feeling rather envious this week as Debby has flown off to Sardinia - I certainly hope she is having better weather than we are. I don`t need to tell you all that we had lots of rain on Sunday which went on all night and carried on the next day for quite some time.  I caught the bus on Monday morning and  I had heard that Bradford-on-Tone had flooding, mostly because I saw it on the National Breakfast News, but was still rather surprised to see it had reached the hedge by the side of the A38, and in fact parts of the road were flooded.  We got a little further along the road and came to a halt.  I thought we would never get going again, and the bus was freezing!  We kept creeping a bit further, and a bit further, and of course most of the road was flooded, with only just enough room for one lane of traffic to get through.  By the time I went home in the evening it was all gone!

The shop was rather quiet needless to say, so I managed to get quite a bit of sewing done, including 30 metres of bunting for a wedding.  Lots of people are making bunting at the moment, especially with a jubilee theme. 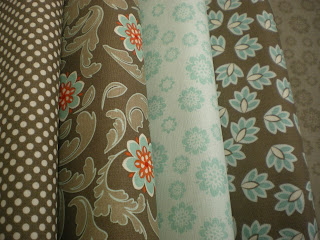 Yesterday a delivery came, it was one box and I was quite relieved when I saw this.  Debby and I have been expecting a delivery from Moda of the new Cabbages and Roses collection, and we couldn`t remember whether we had ordered the whole range or just part of it.  Not very business like but it was ordered last October.  The reason I was relieved was because I didn`t know where it would go.  When I opened the box I discovered it wasn`t the Moda delivery at all, but one from another supplier!  I`ve shown a little bit of it above, there are some lovely reds and greens that also go with it, but I decided to show these colours because we are often asked for them and they are quite difficult to find.  These are Verona from Riley Blake Designs 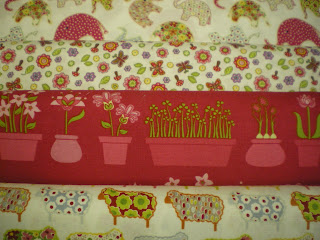 I just had to show these I meant to photograph them a couple of weeks ago, but forgot.  I just love them, especially the sheep.  They are all from Stoff and from a range called Play with Me which I love, apart from the pink fabric with flowers which is called Flower Shop.  They have been selling really well.  The little elephants at the top also come in blue.

Today I went into the shop full of resolve.  I unpacked the box of fabrics, did lots of re-arranging and cutting and managed to get the fabric on the shelves.  Guess what - I had just finished all this when the delivery van drew up outside the shop, and I saw two large boxes and needless to say they were brought into the shop!
I just didn`t know what to do with them.  I finally opened the boxes and they were the Cabbages and Roses Collection from Moda, called Athill.  I took each bolt out of the boxes, cut some fat quarters and then put them back in the boxes!  I really just don`t know where to put them.  Debby and I need to have some serious re-arranging, but I don`t want to do it until I have spoken to her - really I am hoping she will come up with a plan, because I haven`t got one!  Whilst I am going through all this angst (not sure if that is spelt right, I`m sure there should be an h in there somewhere) and woe, Debby is sunning herself in Sardinia, and probably hasn`t thought of me once! 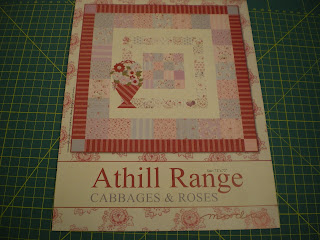 I can`t show you the whole range, so have photographed the free pattern.  If anyone wants one, please pop into the shop and pick one up.  The fabric is rather lovely, it`s very shabby chic in some lovely soft colours. 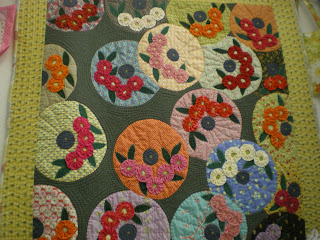 Finally in case you think all I have done is show you fabric in this post, I thought I would show you this piece of work.  It`s at a funny angle because it`s hanging on the wall and I can`t get far enough away from it.  If you come into the shop you may have seen it, but I thought I would show it anyway.  I made it with my friend Rosalind last year and we sent it to the NEC for the Quilt Show.  We didn`t win anything with it, and didn`t really expect to, but had some nice comments from the judges.  It is all hand appliqued and quilted.  The only machining was to put the border and the binding on.  It is based on a little water colour picture I have from Shanghai, and I loved making it.  It`s good to have a project to share sometimes, and hopefully we will do something together again soon.

Finally a few weeks ago a lady called Michelle Keefe came into the shop, she is from Hampshire and runs Workshops I said I would mention her, and of course in my usual efficient way I kept forgetting.  Her website is www.heirloomquilting.co.uk..