It`s been my week in the shop again this last week after a busy time at home last weekend.  My husband John had a birthday with a 0 on the end, and was determined to celebrate it in style!  On his actual birthday 9th May, we went to a restaurant called the Wild Garlic which is owned by someone called Matt Follet(I think thats his name!) who about 3 years ago won Master Chef.   The restaurant is in Beaminster in Dorset.  It was a horrible day, it rained all the time, which put paid to our visit to the coast afterwards.  However, we had a fantastic meal, and I can thoroughly recommend it, particularly the pudding for sharing!  At the weekend he had a party for family and friends on the Saturday, and then on the Sunday we had about 15 people for lunch - I was glad to get back to work for a rest.  I still can`t reconcile myself to the fact that I am married to a man who is 60 - I married an older man you know!  Actually he is not that much older than me, but I am not yet eligible for concessions, and he is!

Debby came back from Sardinia looking slightly tanned and very relaxed, and is now off galivanting in Oxford this weekend, but it is her turn in the shop this coming week.  We have had an up and down sort of week in the shop, some days have been quiet and others busy.  It is of course Malvern this week, and that probably explains the quiet end of the week, but there is no rhyme or reason to busy and quiet times we have discovered. 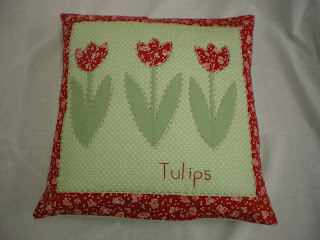 This week I have a cushion workshop with a floral theme, so have been busy organising myself for that.  I love tulips, they are my favourite fabrics, so just had to do something with that shape. 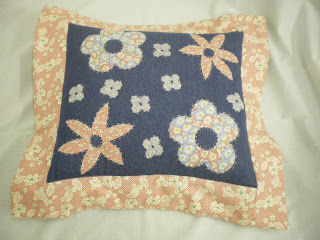 This one I have made with a large flap all the way round.  You only need a small cushion pad, but it makes more of a statement.  I told Debby a while ago that we ought to have some soft denim as I thought it would look good with some of our fabrics.  We duly got some, and then I struggled to know what to do with it!  These fabrics are from the Moda Feedsack range, which I love. 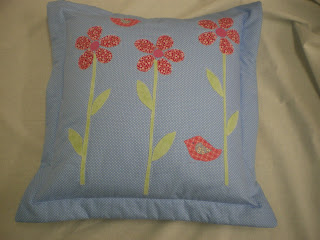 Finally this one again has a flap, but smaller this time and all made from the same fabric.  I tried  to make each actual cushion  slightly different to ring the changes.  The students will also have the option of an envelope back or a zip.  Most opt for the envelope.  I have got some linen cut out, but just can`t seem to get going with it, I have patchworker`s block at the moment I think.  In my head I know what I want, but in reality it just doesn`t seem right.  I may have it completed for Wednesday, or I may not.

I have been pootling along trying to get some projects finished, and trying to make up my mind what to do next.  I have a bag workshop coming up in a few weeks time, so have been trying to get some samples made which I am happy with.  You would think with a shop full of fabric it wouldn`t be difficult to find what you want, but may be there is just too much choice.  Anyway I need to talk to Debby she always seems to get it right.  I had a customer in the shop a couple of weeks ago who told me in no uncertain terms that Debby is much better at putting fabrics together than I am, and I have to agree, she is right, though it grieves me to say it!

We have had a small delivery of fabric in this week, which is rather nice, and I might even use some of it for one of my bags 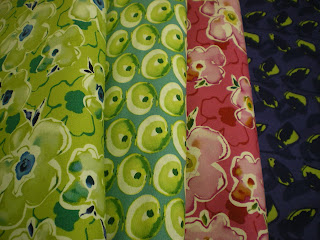 These are from Free Spirit and are called happiness.  We weren`t too sure about them when they arrived, but have sold quite a bit of the two middles pieces.  One person bought 3 metres of the green second from the left to make a dress. 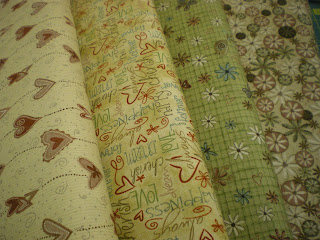 These ones aren`t so bright, but I quite like them.  They are from Red Rooster Fabrics and are called Heartstings.  Hearts and anything with text on is always popular

I had another of my projects in a magazine this week, the new Modern Quilting.  I didn`t take any photographs, because rather disappointingly we were told the publishing company, which has a lot of other magazines titles had gone into administration.  However, we have now received a copy of the magazine, it has appeared in the shops, and I have been reading on other blogs that subscribers have received their copies.  I have left the magazine in the shop hence no photograph.  I don`t know if that will be the last one, it would be a shame if it is because it was quite a good magazine, very contemporary, filled a hole in the market, and of course it was British.  My project was - wait for it - a camera strap!  I have to confess when I was asked to do it I was a little taken aback, I`d never seen one, nor felt I needed one, but I gamely looked on the internet, and there were hundreds.  The next challenge was to make something a little different, which I think I did with a little help from my friend Rosalind who suggested I tried to make it look like a reel of film.  Next week I will post a picture of it and you can see what you think.  I still wouldn`t use one - it wouldn`t be a lot of use for my little digital camera!The magazine also did a little write up on the shop.  Debby  has been completing a really nice bag for another magazine  - not in the same publishing company - this one is for August, so we will keep you posted on that.

Well that`s it for another week.  I am off to see the Olympic torch arrive in Taunton tomorrow, we have got tickets for a celebration at the County Cricket ground - not quite sure what the celebration entails, but will let you know!
Posted by Dotty Dolly at 14:35