I have been in France for a holiday and came back last Tuesday morning, it seems to have rained ever since, apart from Sunday.  We took the family to Brittany and had a really lovely time, we haven`t been back to that part of France since our children were young, and now we have taken them back with their children.  That makes me feel really old!  We had good weather, and as my daughter said consumed our bodyweight in cheese, wine and lovely food.  Just in case we brought a bootload home to keep us going.

Debby soldiered on in the shop, and got rather fraught as several fabric deliveries arrived.  She just got one lot put away having re-arranged everything and then another lot arrived, and so it seemed to go on.  To cap it all on Friday the bulk of the Christmas fabric arrived.  I haven`t told her yet, but some more arrived today.  It`s all in the stockroom, because there is no room in the shop at present.  We will have to get our heads together on Thursday when we are both in, because surprise, surprise people are already asking for it. It all looks very nice, but I`m not sure I`m ready to think about Christmas yet, I still have another holiday to come in September!

We have had some great new fabrics delivered, so thought I would show you some of it. 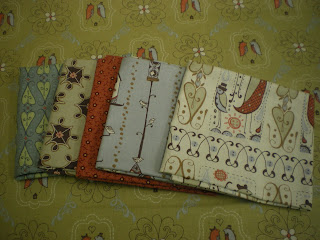 This is one of my favourites it`s by Sarah Watts and called Feather n Stitch. 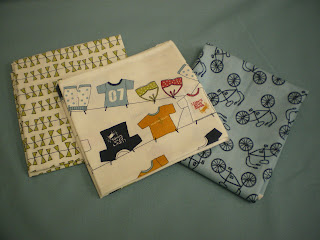 This one is Lucy`s Crab Shack by Sweetwater for Moda.  We only ordered a little bit of this range, but have charm packs. 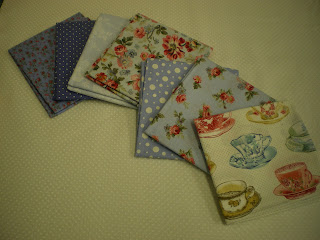 These fabrics are by Lakehouse.  There are lots more of them, too many to show really, but there are other colour schemes.  I love the tea cups, and am trying to think of something to do with them, but not sure what yet.

A week or so before I went away I did a bag workshop, and thought you might be interested to see what  was produced on the day. 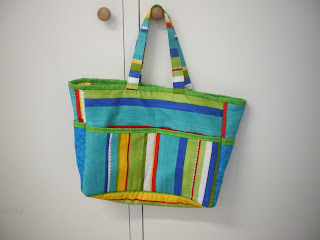 This bag proved to be the most popular on the day.  Jane made this, and went home and made about three other bags the next day! 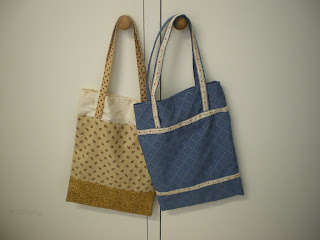 These were made by Jacqui and Rachael, and again Rachael went home and made more. 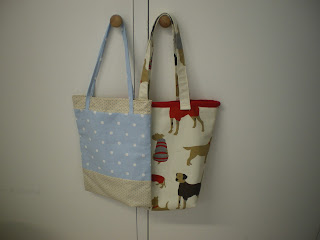 Sarah-Jane as usual made not one, but two bags, everybody loved the doggy fabric. 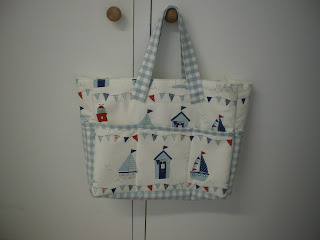 Suzy didn`t quite finish her bag, but it was looking good. She was going to put a red binding round the top, which we all thought would finish if off beautifully. She had intended to make a simpler bag, but when she saw what everyone else was doing decided to go for it.

There were some other lovely bags made, but unfortunately I left it a little late to get out my camera, and they were  gone.

The next workshop is a day of gifts.  I have completed all the samples, and will show you what is produced afterwards. 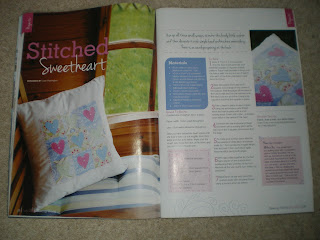 We had another project featured in a magazine a couple of weeks ago, in the revamped Sewing World.  This is a magazine that has been around a long time, so we were thrilled to be asked to contribute.  Debby has a bag in the August issue.  We have produced a kit for this design, and have sold quite a few already.  Take a look at the magazine, there`s some really nice projects in it.

We have finally got our website working which caused us great excitement.  We have lots of new fabrics to add to it, and Debby is working on that at present, but have a look at it, we are really pleased with it.

It`s an interesting life having a shop.  Today a lovely lady and her husband came in.  They were from the Wirral and were down here on holiday.  We were chatting, when another couple came in.  I heard them talking and realised they weren`t English.  The lady from the Wirral suddenly said hello to the other lady in Spanish and they then proceeded to talk to each other in Spanish, while the two husbands talked in English.  I have no idea what was said in Spanish, apart from at one point jelly rolls were mentioned and the nice English lady was showing the Spanish lady what they were and discussing what to do with them - I think.  The Spanish lady bought a kit for the cushion mentioned above.  Anyway it was an interesting interlude, I felt rather like a spare part.  When the Spanish couple left the shop they all started kissing each other, like long lost friends - that would never happen normally - I was a bit put out because I didn`t get any kisses, but heyho!

Last Wednesday was the first meeting of our new quilt group at West Buckland.  We were rather overwhelmed by the number of people interested and had to have a waiting list. It was a good first meeting, and lots of interesting projects going on.  Hopefully next time I will remember to take my camera and show you some.

Thats is for now, happy sewing