Well I am now back from my trip to Italy, and reality has already set in.  I spent the last few days of the holiday in Venice, surrounded by water, woke up on Monday morning to hear on national radio that the A38 was blocked by a flood.  As I have to go along this road to get to the shop this posed a problem.  My husband said take the car - I usually go by bus.  I decided to go to the bus station and see if the bus was running, I got to what looked like a ghost town, but luckily the only bus in sight  was going my way.  Well it was kind of going my way, but it was going via the motorway.  I don`t think that bus had ever gone that fast before, it was an old doubledecker, and everything shook and rattled, including me when I eventually got off, it took me most of the morning to get over it.  At least in Venice the water was where it was supposed to be! 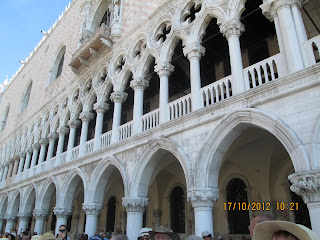 I had a fantastic time, and although I took hundreds of photographs, I will only show you a couple.  The first photograph above is of the Doges Palace in St Marks Square, which is the most amazing building, I just love it and took far too many photographs of it.  Can you spot the deliberate error.  The date says October and not September.  I didn`t realise that the date would appear, it didn`t on my old camera, but at least I have now managed to get rid of it.  Our tour guide David was great, as I said on my previous blog he was an ex-cameraman for the BBC.  In fact he still works freelance for them and will be filming Eastenders this week, before he takes another group over to Europe.  I did ask him a few things, but then started to worry that I would appear stupid, although he was very helpful, and did give me lots of tips, most of which I will probably forget. 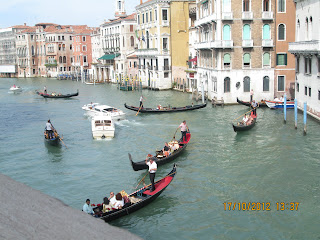 I couldn`t not show you the Grand Canal, this was from the Rialto Bridge, again I took loads, and this isn`t probably the best one - should have asked David for more advice - but I could take forever to find one I am really satisfied with, so this will have to do!  I did take quite an amusing photograph at the other end of the Grand Canal showing a DHL delivery boat.  How fantastic would it be to have your fabric delivered like that!

We also went to Florence, and while in the cathedral I took several photographs of the floor, ever the patchworker looking for inspiration. 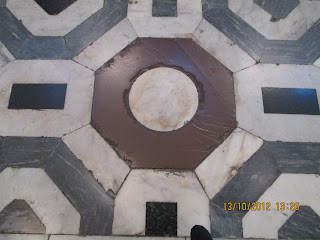 Needless to say it`s all marble.  There were lots of other patterns, but I think one is enough.

I think that is enough about my holiday now, apart from to say travelling across Europe by train is great, and I would thoroughly recommend it.

Back to the shop, and yesterday I re-arranged a few things and finally put all the Christmas fabrics out.  It has been selling well, people are so organised, including Debby who has put a completed Advent calendar at the back of the shop.  While I was away this lovely fabric arrived from Stof.  It is quite grown up, not obviously Christmasy, in fact you could use it for other things.  Some of it has a real Byzantine feel to it. You can`t really tell from the photograph, but there is a lot of gold metallic - quite blingy in fact.

I did tell you on my prevous post that I would  let you know how I got on with my hexagon quilt which I planned to take with me.  Well I have a confession to make, I didn`t touch it.  I could have lied, but I really didn`t have any time to do it at all.  I thought I might on the train, but was frightened I might miss something if I wasn`t looking out the window.

I came back from the shop yesterday determined to do something, and I managed to layer up my churndash quilt, and even started to quilt it.  In fact when I have finished this post I will carry on with it. I finally have some ideas in my head, and hopefully next time I write I will have something interesting  to show you.

Debby came over to the shop yesterday and we caught up over a cup of tea after we had closed the shop.  She did survive without me, although two weeks in the shop is a long time.  Never mind, I spoke to her this morning and she told me she wasn`t talking properly because she had a mask on!  Turns out she was having an internal wall knocked down by the builders, but her and Chris were ripping out the fireplace - happy days!