I can't believe it is nearly three weeks since I wrote the last blog, so have made myself settle down this evening and do something about it.  It has been a glorious weekend here in Somerset, but I woke up this morning to a grey sky and dampness.  I thought the weather was going to be nice this week, at one point Indian Summer was mentioned and now they say this weather will last until then end of the week.  They are even saying it will snow in the North East at the end of the week, thank goodness we live in the South West!

For those of you interested in Vintage Fabrics there will be a sale at Trull Memorial Hall this Saturday, 27th October.  To give it it's proper name it is called The Textile Rag and Remnant Rummage Sale. (Try saying that quickly.)  If you want any other information you can find it at Thevintagebazaarblogspot.com.  I have had several people in the shop recently who have had stalls there, and they all rave about it, as do the customers.  It got very busy last time, so I suggest you get there early!  It starts at 9.30am and finishes at 2.00pm.

Still on a vintage theme, we have a new shop in Wellington selling lovely vintage items.  Jilly has opened it, she sells beautiful vintage china, which she also hires out.  She also does up furniture on which she uses Annie Sloan chalk paints.  She is stocking the paints.  She will be holding workshops on how to transform your old furniture.  The shop is at the back of Staggs Estate Agents, so if you are in Wellington pop in and have a look. Her friend Angela is also involved, she has a blog called the English Romantic, and has made lots of her lovely pieces for the shop.

Last week several of the traders in Wellington met up to discuss arrangements for Christmas.  Last year for the first time Wellington had a couple of late nights and Sunday shopping, and the plan is to do it again.  We didn't do brilliantly well, but I think people have to get used to the idea that Wellington is doing this, and think of Wellington as a destination for Christmas shopping.  It seems crazy to be talking yet again about Christmas, but we have to think about it so early, and as I have said before I am amazed at the number of people buying fabric for Christmas projects.  We have already run out of some designs.  Debby and I have been busy making up Advent Calendars.  We decided it would be a good idea to make up some of the panels so customers can see what they look like, or alternatively buy one ready-made.  I have made up a Christmas quilt from a Moda Christmas Charm pack, we also have layer cakes and jelly rolls in the same design.  Crazy really we haven't had Halloween yet! 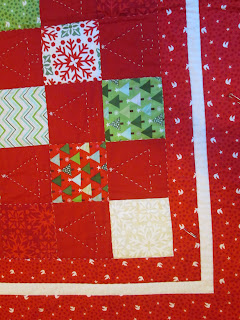 In my usual efficient way the photograph needs to be rotated, but I think you can get the idea.  I haven't shown you it all because I wanted to show the quilted Christmas Trees, and you couldn't see them otherwise.
I have four more trees to quilt and then put the binding on it.  I need to get a move on because Debby is muttering about Christmas stuff in the window when she comes in on Thursday.

I have started my hexagons, and have quite a few made up, but will show you them when I have more.  I must say I have really enjoyed doing it, but have a long way to go.

I thought I would show you what some of the work from out Thursday morning class. 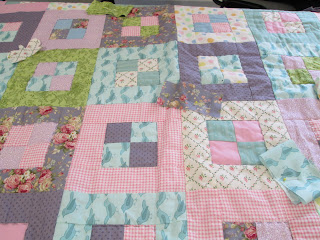 This has been made by Lyn who has been making quilts for all her grandchildren.  This was given to one of them, but she told Lyn that she would like some butterflies on it, so being the good granny that she is, she duly took it home to do as she was told!  The pieces of fabric laid on it are the pieces she is going to use for the butterflies. 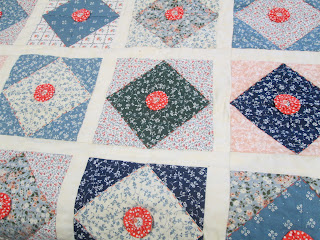 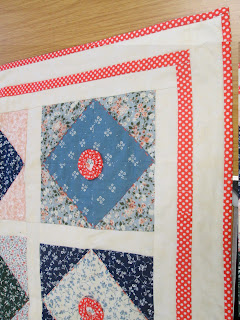 The two above are again made by Lyn.  She put the blocks together, but felt it was lacking something and Debby suggested that she use the organge spot which has totally transformed it! 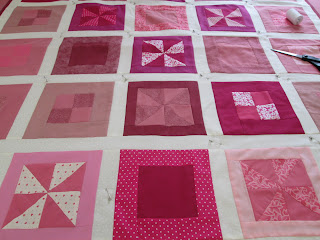 This is the top that Lesley has just put together ready to quilt.  As you can see she likes pink!  She brought in all her scraps and decided on three blocks.  The most difficult thing was finding a colour for the sashing, but it has turned out really well. 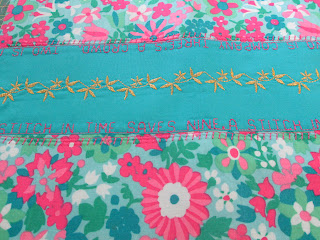 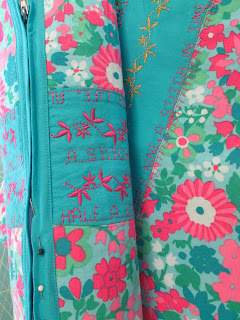 The two photographs above show Anne's bags.  They are tubular with a zip across the top.  I love the text on them.  Anne is the sort of person who doesn't just make one bag, but several.  She is prolific in her output, but always produces lovely things that I want!  She bought a layer cake of the Christmas fabric that I have shown you, and I fully expect her to turn up with the quilt top made up next week!  The others are also producing great pieces of work, and I will show you some more later.

I am in the shop this week, and have spent today making up stash packs.  We sell lots of these and it is difficult keeping up with demand sometimes, so inbetween customers I happily cut away.  I like making them because it means I can play with the colours and mix and match to my hearts content!  They consist of 8 x 10" squares which we sell for £5.00.

That's it for now, I will try not to leave it so long next time before I write.  Happy sewing!