Since I last posted, the weather certainly took a turn for the worse.  Last Friday we woke up to snow, I didn't really believe it would arrive, but it did.  I decided I wouldn't drive, but catch a bus, if they were running.  Luckily they were.  I had been having a really busy week, but that day everybody disappeared, quite sensibly I would say!  I got a lot of fat quarters cut that day.  Saturday the weather was better, and everybody came out again.  We sold lots of wadding last week, which is very sensible, what better thing to do than sit and quilt, especially this week.  Luckily for me I haven't been in the shop this week, and Debby has had to battle the elements.  Yesterday which was the worst day, she got into work, but it kept snowing, there were no customers, and she was worried about getting home so she shut up shop.  Today I did go in with her, and we have had a busy day again, still selling lots of wadding.

Yesterday was to have been the first workshop this year, and we had to postpone it which was a great shame.  We have managed to get another date next month, so hopefully all will be well this time.  This meant that I didn't need to go to the shop yesterday, so I spent the day sewing.  I have been working on some cushion ideas for a magazine that would like to feature some of our work.  I am quite pleased with them, and if they don't like them I will show them to you next time, if they do like them you will have to wait!

Last time I wrote the blog, I mentioned some blocks I had started work on for a quilt as you go quilt.  I want to make 9 blocks and so far I have completed 7. 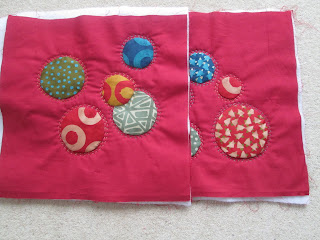 I have made the circles from a charm pack we got in recently, and there are just enough for all the blocks.  The completed blocks will be 12" square.  I have chosen a spotty fabric for the binding.  It will only be a little quilt, but it is to go in the shop, and we don't have much room for large quilts.

I have also photographed my quilt top for the Dunkirk Memorial Nursing Home which I mentioned last week.  I have yet to quilt it, and I will probably quilt it on the machine to save time.  Again it is quite a small quilt, but they are lap quilts. 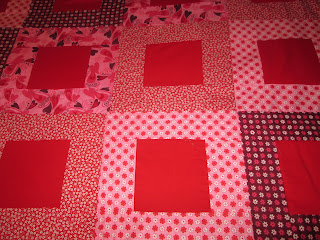 It is rather pink, but although there are a lot of men at the home - it is for ex-servicemen - there are quite a few women who live there too, which is just as well or nobody was want to use it!  It was a really quick pattern to do, and I would have liked to have made something a little more complicated, but it was a question of time, as usual.

I finished this quilt top this week, and now need to get my act together to quilt it.  I took it to our quilt group a few weeks ago, and was saying I thought the green squares were a bit much on their own.  Shirley from Stitcherydo suggested I quilted a flower shape or shapes, which I shall do when I get my act together.  It is made from half a jelly roll, so I now need to come up with something else for the other half!  I have just noticed that the green pieces look like there is a stripe on the fabric, this is not the case.  It is in fact the stripe of my duvet cover underneath! 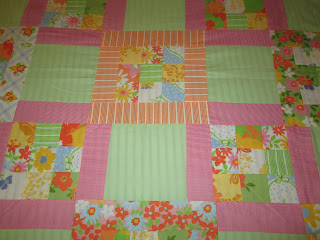 Back in October I showed you a jelly roll which I intended to use to make a hexagonal quilt.  I had been going to take it on holiday, to start, but never did.  I have slowly been working on it when I feel like doing some hand sewing.  Again I am not going to make it very large because I would like to use it in the shop.  I will surround it with white fabric, but intend to use the rest of the jelly roll to make a really nice border using small squares and triangles.  Just got to get the rest of the hexagons completed now" 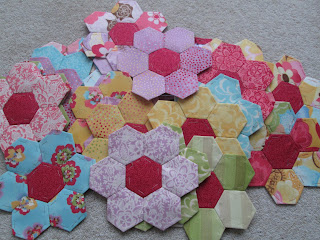 I finished the cushion to go with the quilt for the Beginner's Workshop which I showed you last week. 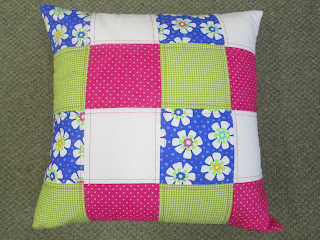 It's very simple, but it's a good pattern for people who really have never done any patchwork before, and there is a little bit of machine quilting - good for practising straight lines. 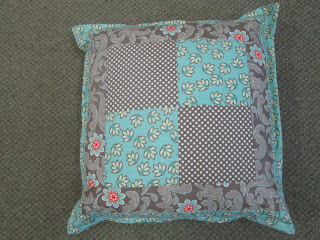 I hesitated about showing you this one, mainly because I took  the photograph on the shop floor, and the colours disappear into the carpet, but decided it wasn't that bad!  It's a really popular cushion design this one, and the one most beginner's opt for at our workshops.

You might like to know that the Vintage Bazaar will be holding another of their lovely days at Trull Memorial Hall, the date is Saturday 16th February.  It is well worth a visit, particularly if you love vintage fabrics.

Well that's it for now.  Hope you have all kept warm, now they are predicting rain and possibly more floods, what's wrong with sunshine and frosts?  Happy sewing.