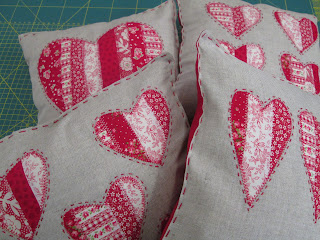 Despite all my good intentions to write this blog every week, I have failed miserably.  In my defence, I have had a really horrible bug, which has taken a while to get rid of and left me feeling a bit like a wet rag.  John, my husband went down with it first and passed it on to me.  He has been really quite poorly.  I am lucky in that I am married to a man who does not get 'man flu', when he is ill he just gets on with it, but we have been like a couple of geriatrics for the last fortnight!  Happily the sun has come out and we both feel so much better.  How lovely to see the sun, it can be as cold as it likes as long as the sun keeps shining!

I have not managed to get too much sewing completed the last fortnight, although I got a few things done before I was ill.  Unfortunately I managed to knock my camera off the ironing board - don't ask - and it has broken, so apart from a few photographs that I took previously I haven't got much to show you.  I did go into the shop one day and had a panic about Valentines Day and put together some little cushions for the window. 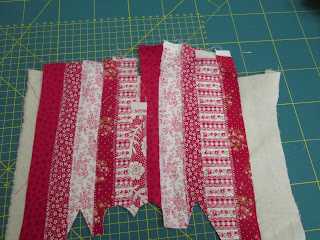 I started by cutting strips of red fabrics and zig-zagging them onto some calico.  I then drew heart shapes onto bondaweb, and ironed them on to the back of the fabric.  The above photographs shows the piece after I have cut the heart shapes out, but I think you will get the idea. 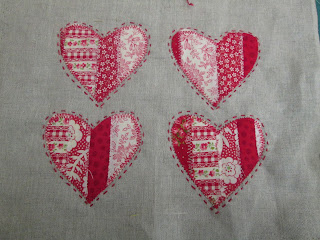 I then stuck them on to some linen, zig-zagged round them and then stitched a running stitch round the heart shape. 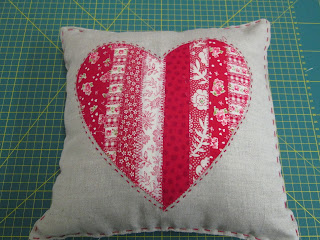 When I had finished, I then ran a running stitch around the edge of the cusion to finish it off.  I made several, which are shown at the top of this post.  I put some photographs on Facebook, and was quite surprised to sell a couple!

I have had two workshops since the last post.  The first one was a Beginner's Class which was quite small as a couple of people dropped out.  We had a lovely day and those that were there got a lot done. 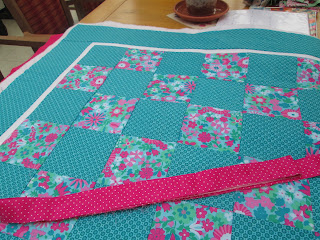 This is Fiona's quilt.  She managed to get the top completed, and then layered it ready for quilting.  The pink spotty fabric will be the binding.  She was very quick and accurate, and I am looking forward to seeing the finished result. 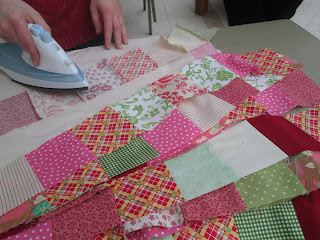 I loved these colours.  This was going to be a much bigger quilt than Fiona's

I took another class last Wednesday which was a Bag Workshop.  There were some lovely finished items, but by then I had broken my camera, so am not able to show you any of the work.  We had one nine year old, Molly, who came with her mum.  She had never used a sewing machine or iron before, but was more than competent with both, and had completed a lined bag by 2.30pm, so then cut out a small drawstring bag, which she also completed by the end of the day.  We were all very impressed with her.  Her mum, you will be pleased to know, completed her bag too! 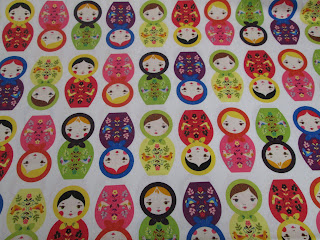 The shop continues to be busy which is good for us.  We are selling lots of our new fabric. Above is a Russian Doll print, which has been flying out of the shop.    I put this photograph on Facebook and the response was amazing. 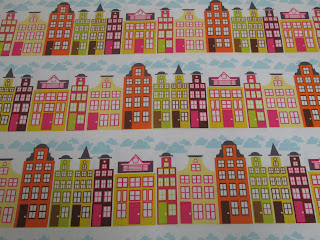 This one comes in another colourway, and it was while I was photographing it to show the Editor of Sewing World that I managed to break my camera, so you will have to make do with just the one colourway.  I am not sure what I would do with this, but I do love it. 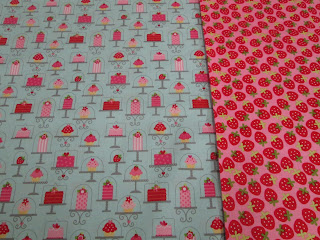 These two are also proving to be very popular.  The blue cakestand fabric also comes with a white background.

I have several little quilts on the go, most of which have completed tops, but need layering up to be quilted.  Hopefully next time I write this blog I will be able to show you at least one finished.  I started to put my quilt as you go together, and got so far with it, but then decided a couple of bits weren't quite as accurate as they should be so have unpicked it and can't quite get myself motivated to put it back together again.  I am making a quilt with my friend Rosalind which is a Tree of Life.  She has appliqued the trunk and the leaves, and I have been working on a border.  When I have added that, I will then start to quilt using kantha which I love doing.  I am enjoying this one, although the border consists of 2" squares and tiny triangles and is taking a little while, but hopefully I will have something to show you next time.

Debby informs me that she has bought us a camera to keep in the shop at all times.  I am taking my own camera into town tomorrow, and hopefully it can be fixed, otherwise I will have to buy a new one. I do hope it can be fixed, I haven't had it six months, and am feeling very cross about it.  You have probably gathered that, because I am getting a little boring about it!

That's it for now, hopefully I WILL write another post next week.  I'm off to Cardiff for the weekend to see Madam Butterfly, which I am really looking forward to, not for the opera particularly, but for the costumes!