I think I mentioned last week that I had driven past the Glastonbury site, well this Sunday I went along with our friends Jenny and Vince, my son and his wife, Neil and Claire, and of course my husband John.  We have been going on a Sunday ticket for several years now, but I was not looking forward to it at all this year.  We got to Glastonbury town for 10.00am to be picked up by one of the many buses that take you there.  It was obvioulsy going to be very hot, but we went armed with wellingtons, or in my case walking boots, and my goodness we needed them!  It was very disconcerting to be baking hot and wading through mud.  We always pitch ourselves half way up the field in front of the pyramid stage, the ground  here wasn`t muddy, but shall we say sticky!  The big thing about Glastonbury however, is  whether to go to the toilet, or not to go to the toilet, or at least how long you can hang on until you have to.  If you are a middle aged woman with my bladder, there is no choice!  The day got hotter and hotter, and the toilets more and more smelly, but when you`ve got to go you`ve got to go!  It wasn`t the best Glastonbury musically speaking I was really looking forward to hearing Paul Simon, but he had a bad throat, not his fault, but he has a new album out and sang lots of songs from this.  I am sure they were very good, but what everyone really wants to hear are all his old songs, and unfortunately  he didn`t sing very many of them.  However, Don Maclean was brilliant, and we all enjoyed singing along to Starry Starry Night, and of course American Pie!
The day was very long and very hot, and at one point I told myself I would never ever go again.  It finished with Beyonce (I think that`s how you spell her name) who I wasn`t really bothered about, but my goodness me could she perform and belt the songs out, accompanied not only by an all female band, but amazing fireworks too!  I fianlly crawled into bed just after two on Monday morning, and who knows I may go again! 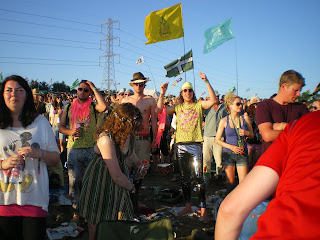 The photograph doesn`t do the spandex trousers any justice, but it had to be taken.  Later there were about six men in them, but it was too dark to take a picture.
Debby tells me she got into trouble in the shop yesterday.  A lady came in with her young son, I`m not sure what the conversation was about, but at one point Debby said `Oh my God` as you do, and the little boy told her off.  She apologised, and his mother said, he does think he is the God Police, so now Debby is worried everytime she opens her mouth that she will be taken to task, and is trying very hard not to say Oh my God, which she does say a lot!

On Satuday Debby is off to Honiton to a South West Quilters `do`.  We were very pleased that they asked if we would be interested in having a stand.  We have been deliberating all day about what she should take, so hope we have made the right decisions.

We are still getting customers in the shop from all sorts of interesting places.  On Tuesday a very nice Scottish lady came in who is staying in the area, before she goes to see family in Scotland, on leave from West Africa.  She lived in America before that, and has done lots of quilting, so has probably gone from the sublime to ridiculous.  It was good to meet Wendy today who came with her friend from further up the county.  I knew I had met her before, but couldn`t think when or where, until she reminded me that I used to teach her daughter, it`s such a small world.  It was lovely to see her again, and I loved her linen bag with red buttons embroidered on it and the fantastic red and white spotty lining.

We have finally received all our fabric orders for some time now, but thats probably just as well as the shop is bulging at the seams.  That said we are expecting our Christmas fabric in soon, I can`t believe I have told you all that, but we have been asked for it already and have sold several advent calenders.  Debby goes quite quiet when this fabric is mentioned, but I am convinced she wants to open a Christmas Shop!
Posted by Dotty Dolly at 20:29