I hope you all enjoyed your Christmas and New Year break.

Over the holiday I managed to spend most of my time sewing which was a real treat, much more enjoyable than tapping on a computer keyboard. I produced over 70 star blocks (more than needed) but once I started I couldn't stop I had forgotten how relaxing it is.  Because the blocks are all random I spent quite a long time laying them out and moving them around until I was happy with the way they looked.  I stitched the blocks into rows and laid them in order on the ironing board and then proceeded to knock them off, I now cannot work out the original layout so haven't completely finished.

On our new system I was back at work on the 3rd January which was a bit of a shock and I thought it would be really quiet because all the sales were on at the time.  Surprisingly we had a steady of flow of people coming in and late in the afternoon it was lovely to see Anne Baxter who brought in some samples for her workshops.  Whilst we were wandering around the shop she asked me what was wrong with my skirt and it appeared that for the most of the day I had had the back of my skirt tucked into my knickers.  I nearly died of embarrassment, she then said it was lucky that it had been quiet! So the reason I had been busy was probably that everyone in Wellington was sending their friends in to look at the funny woman who couldn't dress herself properly.  This seemed to set the trend for the week really.

Over the last couple of months I have had trouble keeping my glasses on particularly when leaning over and I have been asking my husband to tighten the screws which he has been meaning to get around to.  On Wednesday afternoon I was serving a customer, my clothing was all in the right places but when I bent my head forward yet again my glassed dropped off but this time one of the arms decided it really had had enough and fell off completely.  Because I can't see without my glasses I had to sellotape the arm back on, not attractive at all plus they were then lopsided.  I felt like Jack Duckworth from Coronation Street for the last couple of hours of the day. 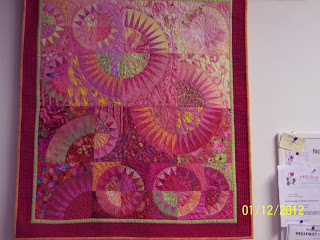 I thought I would also show you the gorgeous wall hanging that we have in the shop which was produced by Shirley Sherratt.  Everyone comments on it, the use of colour and the machine quilting, we have had several offers to buy it but I know Shirley will not part with it and I don't blame her.


Now to the bad news.  Joan and I have made the difficult decision to increase our prices on 23rd January.  We have absorbed every price increase over the last year but unfortunately cannot carry on doing so any longer.  We will continue to keep our clearance corner and our reduced baskets so hopefully this will help out with the cost of your projects.

Finally I thought I would also mention about all the quilting magazines Wellington Newsagents hold.  They have a brilliant range including magazines from Australia, America and France so are well worth a visit and are only next door to us.