I don`t know where the time goes to, it`s nearly two weeks since we updated our blog, so here we go again!
We have been busy with our accounts, or should I say Debby has been busy with our accounts, while I have made sympathetic noises and tried to look like I know what she is talking about, however she is not easily fooled.  Jamie the accountant and Debby have taken on a saint like status as far as I am concerned.  Every time an email has arrived from him I go into a state of panic daring myself to open it wondering what he wants now, while Debby calmly gathers the necessay information and duly sends it back to him, and he duly deals with it with no fuss.  I want to tell you that it is all over now, but I am not going to, because if I do there will be another email to worry about!

It has been my week in the shop although Debby came in on Wednesday as she ran a Jelly Roll workshop for a lovely group of ladies that meet at Puriton.  She took a couple of packets of biscuits with her which came back unopened, I commented to her how good they were, but she told me they had brought their own, and cakes!  Of course now I have opened one packet, and Debby the other and guess what all of them have gone!

I have been trying to get some of my projects completed this week.  I have one quilt  that just needs two edges of binding stitched down.  I have nearly completed another layer cake quilt which I am really pleased with, and which I will photograph next time.  I have made it in a Moda fabric called Ruby which I love.  I have another to make, but this time have used fabric which I wouldn`t normally use from another Moda range called Blueberry Crumb Cake.  Because they are for a workshop I feel I have to cater to different tastes, but it`s not always easy, I would much prefer to use bright fabrics.  I also started some applique panels earlier in the week.  I have got so far with them, but can`t make up my mind whether to stitch by hand or machine.  Unfortunately my machine isn`t working and my old one isn`t so good, but I will have to make a decision soon because again they are samples for a workshop. 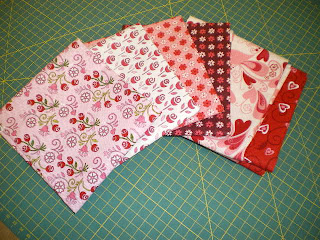 We have had a few new deliveries in the last two weeks.   The photograph above is a selection from Moda,
which has been selling really well, particularly the fabrics with the hearts on.  Marie who comes to our Wednesday evening class has made a lovely heart themed table runner using some of these fabrics, and of course I just have to make one, bearing in mind we need a Valentine themed window.  I have cut it out, but that is as far as I have got.  Hopefully I will get it completed this weekend - watch this space! 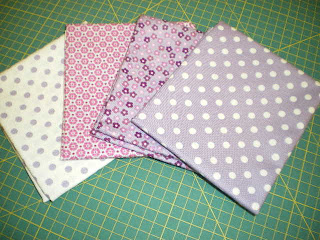 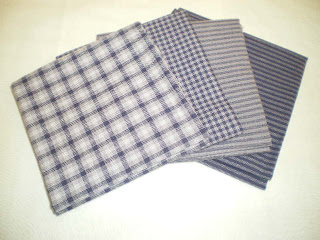 The two ranges above are from Stoff.  The checks and stripes are 60" wide, and proving to be very popular, we had a lady who came into the shop last week who bought some along with some greys that we have, and then put them together with a bright acid green, and they looked fantastic.  I love it when other people put together fabrics that I wouldn`t even have thought of, and of course I now want to make something using these colours too - it`s not going to happen!

One of my other projects this last week has been to make a small item for a new quilt magazine which is to be published soon.  I have made the project to go in the second edition.  I`m not going to tell you any more about it, because I can`t quite believe it will actually go in there, so until it does and I see it with my own eyes my lips are sealed.   There was some trauma involved with this because it was while I was making it that my machine decided to pack up on me and I had to complete it on my old machine, which does not stitch nearly as beautifully.  I am not as happy with it as I would have liked to have been, but it has now been sent along with the instructions, writing those were a whole other trauma - but we won`t go there, lets just say I will not be so critical of other instructions in the future!

We have ordered yet more Christmas fabric this week, this time from Stoff.  The rep came to see us and we were determined we were not going to order anything else, but needless to say we caved in.  They are very clever people these reps.  What they do is put the not so good stuff at the top of the case and you think well thats OK we will have some of that, but they save the best pieces for the bottom of the case, and they just keep coming, and we don`t ever seem to learn.

Hope you all have a great week and keep sewing!
Posted by Dotty Dolly at 14:43