Debby and I have had an eventful few days.  I have been to London and survived the snow!  Poor Debby has been to hospital and then back again.  We have had the first of our workshops, and had our photograph taken by a photographer for a national newspaper - more about that later!

Last week was my week off so I went up to London to stay with my son and his wife.  We had a great time as we always do.  I won`t bore you all with the details, except to say that we went to a little museum called the Geoffrye Museum down the road from Liverpool Street Station.  Its a museum of the home and is in what was once almshouses.  It has room settings of the middle class, or the `middling` class as they used to be called. The room settings show how our homes developed  over the centuries, and is absolutely fascinating.  I have to say there wasn`t a quilt in sight, but may be thats because middle class homes didn`t have them!  There were gardens but they were closed.  It was so cold we didn`t really mind, and you could look out at them from a little garden room which you could sit in and read books on the home and garden. It has a lovely shop and an excellent cafe. Anyway if you ever get the chance to go you must.

There was great excitement earlier in the week when we got our copy of a magazine which is going to feature our work next month.  The excitement was because on the page showing whats coming next month there was a photograph of our cushions.  We will tell you what magazine it is when it is out - we still can`t quite believe its going to happen.

As I mentioned we also had a photographer in the shop taking our photographs for a feature in a national newspaper in a few weeks time.  We were both a little nervous, but he was great.  We did ask if he could get rid of our extra pounds, and I was particularly worried about my roots (Debby had had hers done the day before!).  He was very patient, and put us as ease, but when we were being particularly trying he did say to us `I have photographed super-models you know` that soon put us in our place.  That said he did say it with a grin!

We had our second workshop this week with Anne Baxter and the feedback was as ever, great.  Anne is an excellent tutor with a really good sense of humour, and has the ability to put everyone at ease no matter what level they are.  I hope we will soon see the results of the day, so if any of you reading this went to the workshop we would love to see your finished projects.

We had an email from Anne-Marie in Holland this week who tells us that she has had our name included on the Dutch Quilters Guild list of shops to visit in Great Britain.  That was really kind of her, and hopefully we will meet some more Dutch quilters as a result.  Anne-Marie visited us last summer when she stayed in the area. 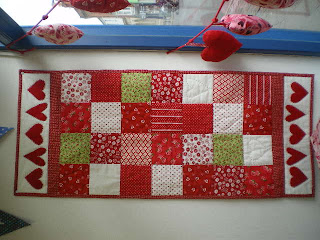 Above is a photograph of a table runner which went in the window this week for Valentines Day.  If you look carefully (actually you don`t need to look that carefully its pretty obvious) you will see that the photograph is the wrong way round.  I had a much better photograph of the whole window which was all Debby`s work, except I don`t seem to be able to turn it the right way without saving this blog as a draft and then going into the photographs to sort it out, so I hope you will forgive me.  I am in the shop writing this, and need to concentrate inbetween customers.  As you all know computers are not my favourite items. 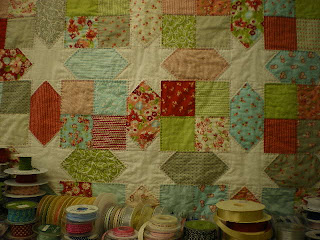 I finished one of the quilts I have been making for a layer cake workshop, which is now hanging in the shop.  I have quilted it by hand, it just seemed easier, and with the cold nights it was very cosy.  I find quilting by hand very theraputic, and it stops me from falling asleep watching the rubbish on the television.  There is a red border which you obviously can`t see which is a pity because it really finishes it off.  I feel it needs more quilting, and will probably do some more at a later date.  I loved the layer cake it was called Ruby by Moda. 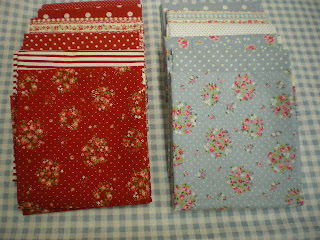 These lovely fabrics arrived last week and are from Sevenberry.  I have great plans for a window display with this fabric, but Debby may beat me to it.  They are very fresh and springlike, and just looking at them makes me feel better, but then I am rather sad like that! 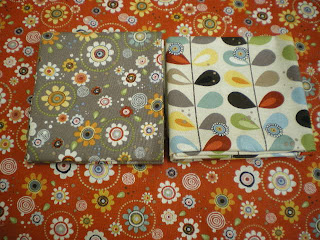 These other new fabrics are from a new supplier and they are called Long Live Vintage.  They have been selling really well.  On the vintage theme I must tell you about The Textile Rag and Remnant Rummage sale which is taking place at Trull Memorial Hall, nr Taunton on Saturday 3rd March.  If you want to find out more visit thevintagebazaar.blogspot.com

It`s been a funny week, there have  been days when it has been so cold and grey you don`t think anyone will come out and you are busy all day, and then others when it is sunny, still cold, and you don`t see anyone.  Lets hope the weather cheers up soon.
Posted by Dotty Dolly at 10:33