Getting ready for Westpoint

Debby and I have spent the last two weeks getting ready for the quilt show at Westpoint.  It is quite problematic because our storeroom is quite small, and Debby doesn`t like mess!  I don`t either really, but somehow or other I seem to cope with it better.  Anyway we have both been cutting fat quarters as if our lives depended upon it - in fact we could probably do it in our sleep now.  There is always a debate about how many we cut, if we cut too many we have to find a home for those that we don`t sell when we get back and if we don`t cut enough will we run out.  Luckily Exeter is so close that we can pop into the shop on the way back and cut up some more if necessary.  We were going to leave the shop an hour earlier to set up today, but as usual things conspired against us so we left the usual time along with Chris Debby`s husband with his estate car, I must just add it is a Mercedes, so rather posh!  We were a little disconcerted to find that everything went in his car, apart from two small tables and a shelf unit which were still in my garage. When we went to Malvern last Autumn we hired a van! I`m not sure if we are just getting better at this, or we have left loads of things in the shop without realising.  We will find out tomorrow!  We do need to leave early tomorrow to do the tweaking, but hopefully as they say it will be alright on the day. 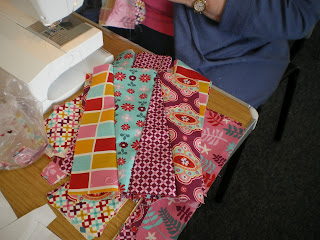 I ran a Layer Cake Workshop on Saturday which I thoroughly enjoyed, I just hope everyone else did!  It was interesting in that most of the class had very bright layer cakes, and only a couple had more traditional fabrics.  Barbara brought a bag of Sanderson linen prints which she had bought for 20p each and cut into squares.  She made a really unusual but lovely quilt top.  Anne brought a very bright layer cake with lots of red, with a lime green contrast which certainly had the wow factor.  The picture above shows Rhian`s turquoise and reds with a touch of pink.  She brought the completed squares to the Thursday morning class today and they were looking really good . 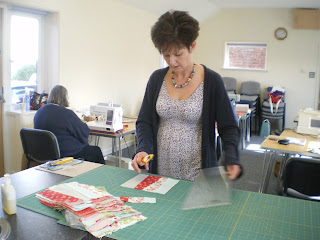 Trudy busy cuttting her pieces into squares, another red and turquoise fabric, it looked brilliant.  Trudy came to a Beginner`s Workshop a few weeks ago and is now well and truly hooked.  She is turning out pieces like there is no tomorrow!  She came with her lovely mother in law Anne - a different Anne than I mentioned earlier - who went for a stunning red and white mix of fabric.  There was certainly a lot of red last Saturday, my favourite colour! 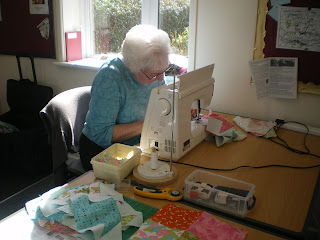 Mary working away on her machine.  I had never met Mary before, but it didn`t take me long to realise that she could probably have taught me!  She belongs to Apple County Quilters one of our local quilt groups.

One interesting point about this smashing group, I always take biscuits to go with the tea and coffee to a workshop, but usually come away with most of them still in the packet.  I am sure they won`t mind me telling you that I had about three left and I took two packets!

I expect you have all heard of Mary Portas.  The government has provided some money to help several British High Streets, and she is going to decide which towns will be chosen, and advise on how best to use the money.  Wellington has put in a bid, along with lots of other towns, and the bid goes in tomorrow.  Keep your fingers crossed for Wellington, it would be so fantastic if they were chosen, but there`s a lot of competition out there.  We have had a new clothes shop open in the last couple of weeks, it`s called Snob and has some great stock.  Another clothes shop has re-opened where Diva used to be and now stocks one or two of my favourite labels.  It would be fantastic if you come over to Wellington if you paid them a visit, I`m sure you wont be disappointed!

We will let you know how Westpoint goes when it`s all over.
Posted by Dotty Dolly at 21:46