We seem to have got rid of the rain at last, and although I keep saying I don't mind what the weather is like as long as it doesn't rain, it would just be so nice if we had a bit of sun!  At least there is more daylight now, I am getting up when it is light, and leaving work when it is light - it makes such a difference.

It has been a funny few days in the shop, It was quiet on Monday and Tuesday, ticking along nicely. On Wednesday apart from the Post Lady, I didn't see anyone for three hours, then everything went mad, and I didn't stop.  I had great plans to cut more fat quarters which seem to be going down rapidly and  get lots of sewing done, but have not achieved much at all.  I managed to make these bags, which I have decided to call 'Bits and Pieces Bags', mainly because there are all sorts of bits and pieces you could use them for, and I can't think of another name for them! 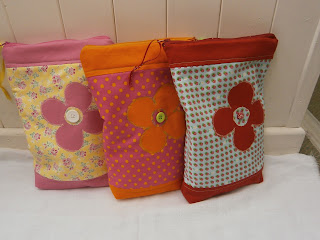 I sold several cushions on Monday morning all of which were in the window, and then had a panic about what to replace them with, hence the bags.  I have also made a couple of knitting bags with Mother's Day in mind.  Retail is a strange occupation.  A few weeks ago I made some cushions for Valentines Day which I showed you in the last post, and didn't sell them, however on Monday I sold three of them.  There is no rhyme or reason to what happens, and Debby and I have given up trying to work it out!

I now have to make some cushions for a workshop later in March.  I have them planned, but just haven't managed to find the time to make them.  They are now my top priority.  We have  some new Moda fabrics La Belle Fleur, including charm packs and I intend to use these - Debby has given me my instructions! They are quite pretty traditional patterns, and I am looking forward to getting on with them.

Next Wednesday I am doing a workshop on quick and easy ways  to make triangles.  I have made quite a few samples for this.  I eventually intend to make a sampler from them, but I have left them at home, so will show you them later.  I also have several other samples including  two quilts, and  two cushions. 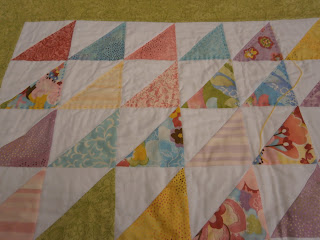 The photograph doesn't do justice to the colours.  I have been wanting to make a quilt with this pattern for so long, and now I have.!  It just needs a border on it. 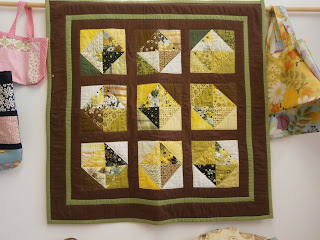 I made this one when we first opened the shop, but people are always commenting on it.  It's made from a charm pack.  The colours are not my favourite, but I do like the pattern. 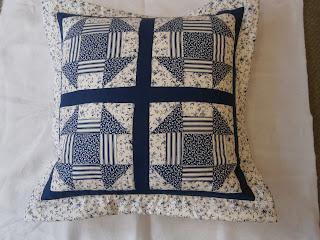 Lots of customers seem to like this cushion, and I love doing churn dash.  The fabric is a french design.  It was quite fiddly because the blocks are tiny, but well worth the effort. 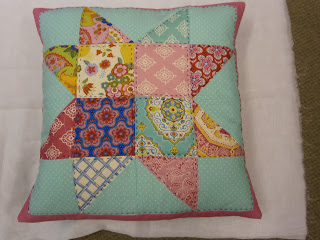 I have made a runner from this pattern,  and I had enough for another block.  It is from another Moda Charm pack called Trade Winds.  I wish I had made a larger pink border.  The cushion pad is 50cm x 50cms, so it quite large.

I mentioned in my last post that I was going to see Madame Butterfly.  I wasn't entirely convinced that I wanted to go.  My daughter Katie bought the ticket for her dad who enjoys the opera.  She persuaded me to go along as well, so all three of us went last Friday.  I have seen the Opera House in Cardiff from the outside lots of times, but have never been in.  It is as amazing inside as it is out.  We had fabulous seats, second row from the front, so we could see the orchestra as well.  The actual opera exceeded my expectations.  I had said to a customer last week how much I was looking forward to seeing the costumes and she told me I might be a bit disappointed as the Welsh National Opera Company have a reputation for doing things a little bit differently.  I was expecting lots of colours which we didn't get, but the costumes were nevetheless beautiful.  They were very simple and colour co-ordinated in shades of brown, coffee and cream, quite stunning.  The set matched and it was all just perfect. Then, of course, came the actual singing and it was fantastic.  Admitedly Madame Butterfly looked a bit older than the 15 years she was supposed to be, but you soon forgot about that when she started to sing, it was just wonderful, and at times made me want to cry.  If you ever get the chance to go you must!