I decided when I got up this morning that I really must update the blog.  I was rather shocked when I looked to find the last post was done at the end of February, and here we are in April.  So much for my good intentions.

I don't know about you but I sometimes feel there is a conspiracy against me as far as computers are concerned!  As some of you will know we got a new camera for the shop and I couldn't seem to download the photographs on to my computer at home, although I could on the shop one.  However, I have been so busy in the shop that I didn't have time to write the blog when I was in there, and so it got left.  We also had another problem in that we just couldn't seem to download any photographs onto Facebook on either computer.  The final straw was that having solved the problem last time of downloading the new details of our workshops on to the website, it doesn't want to play this time.  Oh yes and hotmail have yet again changed everything, and we seem to have lost our favourites!   I finally managed to sort out the photographs on my computer this morning with a little help from my daughter-in-law.  I am now able to post photographs on facebook.  I hope you are not all too bored by this hopeless saga, but I just feel I need to explain why we disappear of the radar every so often!  I  need to try and work out what to do with the shop computer now, but I just can't face that at present.

Last time I wrote I mentioned a cushion workshop I was going to have to make some cushions for, well I made them and the workshop is now done and dusted, but I thought you might like to see some photographs of the samples anyway. 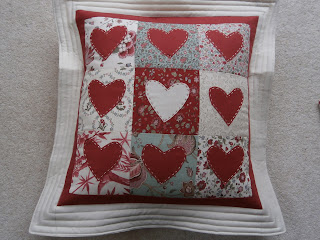 Every time I do a workshop I find that anything with hearts is popular, and in fact nearly everyone who came made a version of this cushion.  I struggle with these traditional fabrics as I have said before, but I think it worked out OK.  Certainly this range is going very quickly. 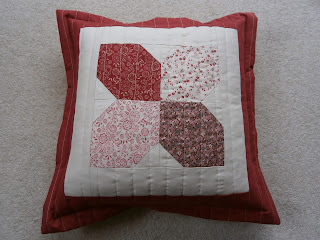 I like this snowball pattern, and I don't know why I don't do more of it.  I only every seem to do it in fabrics that I am not that keen on.  I also like the quilting on it.  I have seen lots of quilts quilted in this fashion and keep promising myself that I will make one one day - who knows when that will happen.

I have also been busy making a dress.  I like to make clothes, and it is especially nice to make something that doesn't have to fit anybody or anything apart from a dress stand. 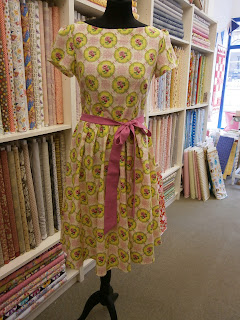 I got the pattern free with Sew magazine, although it was a Simplicity pattern.  It would look better with a net skirt under it, but I wasn't about to make one!  We have had lots of comments about it.  One reason we decided on a dress to go in the window was that the Great British Sewing Bee starts tonight - great excitment about that!  Debby and I have a copy of the book, and I have made a laundry bag which is in the book and was also featured in the Radio Times.  The instructions told you to buy 1.9 metres for the bag which seemed an awful lot to me.  Having made it I managed to get it out of 1.5 metres, although if your fabric was one way then you would need 1.9 -it's rather an expensive laundry bag!  I hope the programme is a success, it would certainly be good for business, and it would be great to see more and more people sewing.  I read somewhere the other day that sewing machine sales are going through the roof at the moment, long may it continue!

I have also been making bags for our next workshop 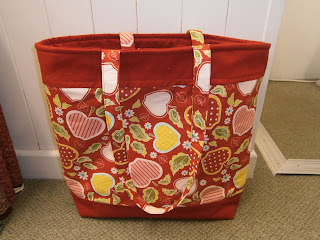 I have been wanting to make something from this fabric ever since we got it in the shop.  I am rather pleased with it and would use it myself.  We finally got some more pellon in and it makes such a difference to the stability of the bag. 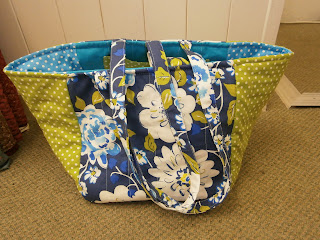 I decided to make this bag after our Coates rep came into the shop with something similar (one of only a couple of female reps!) I rather liked it and thought I would have a go.  It is reversable, and is made from squares.  It is quite floppy - no pellon in this one!  Hers had two sets of handles, so you could either put it on your shoulder or just use small ones, but I decided not to do that and leave it with just the long ones.  I think I like it!  I certainly like the fabric, although the blue flowery fabric is in our clearance section, I can't understand why it didn't sell.

I don't know about all of you, but I am fed up of all this cold weather.  Yesterday, Easter Monday, we went to Lyme Regis.  The sun wasn't shining, and it was freezing down there.  The wind was coming off the sea, it was the sort of cold that makes your face and ears hurt!  One good thing was we went via The River Cottage Canteen at Axminster, we went early in order to get a table, and were lucky.  We had a great meal, as always.  There are some lovely shops at Lyme, but as we were with my husband and son, I didn't get to go in many of them!  The sun has been shining here today, but it is still really cold.

Debby is off to Germany tomorrow morning and will be away for a few days, so I am in the shop for most of the rest of the week, and next week.  Hopefully I will get lots of work done.  I have some orders to complete and I also have to send instructions to Sewing World for two cushions that will be featured in the magazine later in the year.  I have a Log Cabin Workshop coming up and am going to make some wonky log cabin blocks so am looking forward to making those.