Once again a whole month has gone by and I haven't posted anything.  Both Debby and I have been busy the last month - I suppose that is obvious really!

We have had several workshops including bags, cushions, log cabin and variations, and jelly rolls.  The jelly roll workshops are always very popular and fill up quickly.  I find it strange because I like layer cakes, but those workshops just don't seem so popular - perhaps it's me!  I took the log cabin workshop, I was really keen to do some wonky log cabins, however, it wasn't as easy as I thought it would be!  Below is my first attempt which turned out OK, but you have to be careful that you don't make it too wonky! 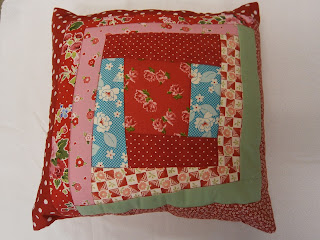 The next one was made as one large piece that I cut into 4 and stitched back together.  I thought I would use some colours that I don't normally go for, well except for the pink!  I quite liked it, but just left it as a sample, as it was too large for a cushion or a bag, and I couldn't seem myself making a quilt with these colours. 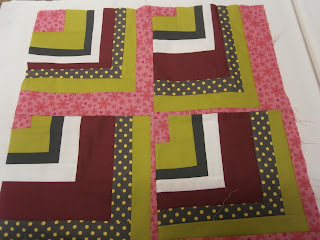 I have been working on the quilt below for a layer workshop which I will be running tomorrow.  I have put the top together, and hopefully will put the quilt together tonight, ready for quilting which I will do by hand, when I get round to it. 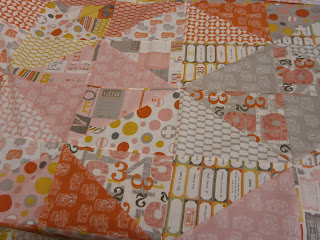 This is made from a layer cake called 2wenty-thr3e, no it isn't a mistake that is what it says on the label.    It was supposed to be split into light and dark, but it was quite difficult to do, so many were neither one or the other, but it's turned out OK.  There is a small border made from the left over fabrics as is the binding.  I going to back it in calico.
My next project is going to be a top for the window, and hopefully one or two for me for my holiday.  I saw the pattern when I popped into Bredon's in Taunton last week.  Terin (I hope I have spelt her named correctly!) had it on the counter as she was planning on using it, I love little cotton tops rather than t-shirts which I find too hot when I am somewhere hot, which I will be soon.  If I make the top for the window, I am also going to have to make a skirt! 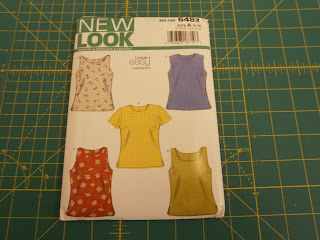 We have been selling a lot of fabric for dressmaking.  I put a dress in the window which lots of people have commented on, although one or two people didn't seem to realise that I had made it with fabric that we sell!  I really do think the Great British Sewing Bee has helped.  I loved every minute of it, and thought the correct person won.  I understand that they are already recruiting for next year, and that there will be 6 episodes with more contestants.
I had last week off,  We went to a wedding just outside Cardiff.  My daughter Katie's close friend Vicky got married.  Katie and my grand-daughter Georgia were bridesmaids, and I made their dresses.  Unfortunately all the photographs are on my husband's camera which I don't have in the shop.  It was also Katie's birthday.  The weather was glorious and it was just a lovely day.  I also made 40 odd metres of bunting which looked great, and took a couple of orders for other weddings on the day!  Vicky had been collecting vintage china for the last year or so, and all the flowers on the tables were arranged in old teapots,   There were china cups and saucers on the table and we all drank tea out of them after the meal.  Needless to say my husband wanted coffee - there is always one.  Inside the cups were beautiful heart shaped biscuits, it was all fantastic.
Hopefully I won't take so long before I do another post, but don't hold your breath, I am off to Rhodes at the end of the month.  If you are interested in what's going on we are a little better at posting on Facebook.
Posted by Dotty Dolly at 12:33