Time for another post, as once again it's been a while since I posted anything.  We have been keeping busy with various goings on.

Last week we had a day away from the shop and went to Malvern for the quilt show.  I was a little disappointed because the week before Debby came into the shop looking a little distracted.  I wondered what on earth was the matter with her, but it transpired that she was in shock because she had bought herself a new car, not just any old car, but a red Audi!  My disappointment as far as Malvern was concerned was because she didn't have it in time for us to go in it!  Anyway we slummed it in her old car and got there in record time - have I mentioned that she doesn't hang around.  My knuckles are usually white by the time we get anywhere.

We went not to buy fabric, but to see what the trends are at the moment, and if there was anything new that we hadn't come across, but there wasn't really.  It is a great show and we thoroughly enjoyed ourselves looking around.  We were rather concerned to see some fabrics selling at cheaper prices than we can get at cost, but they were not particularly nice quality fabrics, or the colours were not very good.  We always worry that customers will think we are making a fortune on our fabric, which we can assure you we are not!  We met two of our reps there, and they were also concerned to see some of their fabrics being sold very cheaply, and they didn't know where the fabric could have come from and how the seller could sell it at the prices they were.

The thing that really fascinated me was the huge range of quilting rulers, I have never seen so many different shapes and sizes, and  I think I would have to have several lessons to be shown what to do with them!  There was one particular set which comprised of two different kinds of curves and they cost nearly £60.00.  I couldn't work out how you would use them, and nobody I asked could tell me either.  I suppose I should have asked the stallholders, but they were very busy.  May be I need to get on to Youtube and take a look.

We have had several new fabrics in this week, some have a novelty theme which we hope might be suitable for children. 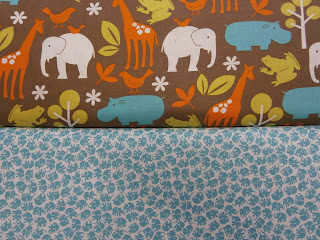 I love these ones, particularly the little elephants, both are by Michael Miller.  The cat fabric below is actually much nicer than the photograph shows, but it is selling well.  People seem to love cat fabric! 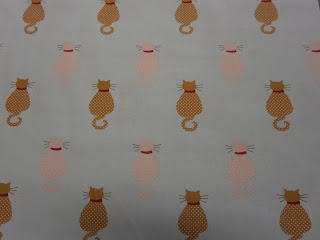 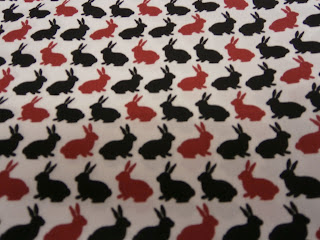 Continuing with the animal theme, we couldn't resist these rabbits!  This fabric is by Sevenberry. 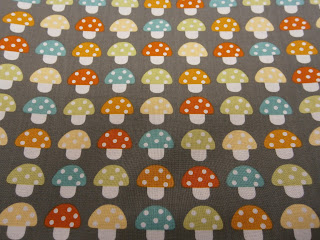 Finally we loved these toadstools.  Let's hope everyone else does!

Debby ran a workshop on Bucket Bags last week, as usual there was a waiting list for this one, it always seems to be very popular.  We also ran our first Know your Sewing Machine Course this week.  A friend of ours Angela ran this.  Again we have a waiting list for it so will be running it again.  It seems like everyone wants to sew at present which is good news for us!

I have been busy making samples for a Stars and Stripes Workshop which I am running in June.  Time does not seem to be on my side at present.  I will be away for a couple of weeks from next week so need to get them completed.  I am just about there.  I found the idea for this in a book I have called The Quilter's Book of Days.  I felt that offering a workshop called Stars and Stripes that I needed to have at least one sample that was red, white and blue! 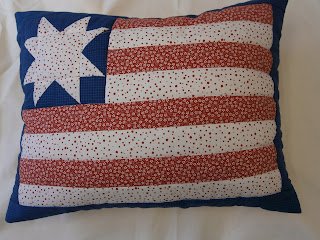 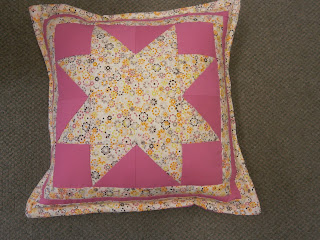 I quite liked this one,  the photograph does not do the colours any justice at all, but I am sure you get the idea!  I have made a couple of other samples, and just need to make a wonky star, which for some reason I keep putting off!  I have two days left in which to complete it, so need to get my skates on!

We had three of our fabrics featured in Sewing World this month in a section called Summer in the City.  It's always exciting when you see your fabric and the name of the shop in a magazine.  There has been quite a good response and we have sold quite a bit of it.  The editor saw a photograph of one of the pieces on our Facebook page and asked if we had any more.  Sometimes you beaver away at blogs and Facebook and wonder if it is worth it, and then something like that happens, and you realise that yes it is!  We also have two cushions which will be featured in Sewing World next month, so that will also be something to get excited about!  We are very sad!