It hardly seems possible that another week has gone by and its time for another post.  Debby is off having a well deserved rest, although she has still kept busy sorting out a few last queries on the new wesbsite which is nearly there.  It`s been a long time in the process, but it will be worth it when it`s ready. 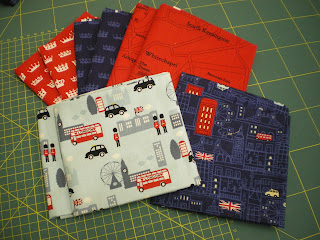 We have had some great new fabrics this week.  Above are some of my favourite - Cool Britannia by Benartex.  We have already sold quite a bit, the most popular seems to be the crowns, but personally I love the pale blue with the buses and guards, etc. on it.  Customers are buying it for bunting and cushions, but I quite fancy a couple of bags - watch this space. 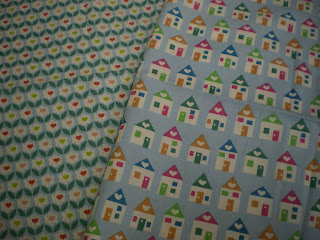 This great fabric is again by Benartex and is called House and Home.  I just love the little houses.  For some time now I have fancied making a school house quilt, and this makes me want to make one even more.  Thats another one to go on the `to do list`. 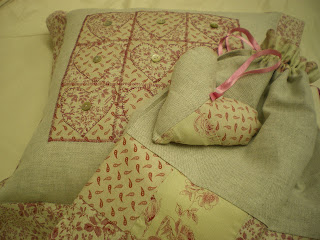 This last selection is once more by Benartex, and is called Olivia by Michele D`Amore.  A different kind of feel altogether.  When it arrived I knew I just had to do something with it, and as the window was due for a change I decided this was just the excuse I needed.  I loved the look of it with the linen, so decided to make two cushions and then a bag, but I had some scraps left over so made this little drawstring bag and a few hearts.  The fabric also comes in blue.

We have started to get ready for the Quilt Show at Wespoint next week, but it is always a problem about where to put everything.  We have a small stockroom at the back of the shop, but space is at a premium.  I have already warned Debby when she comes in that she will probably trip or fall over the boxes which seem to be everywhere.  It hasn`t helped that last Saturday when I had just sat down to eat my lunch I heard a dripping coming from the stockroom.  On investigation I discovered water was coming through the ceiling!  I rushed next door to tell Helen and Jim or landlords, but when I got back it wasn`t just dripping it was gushing.  I was rushing around like a mad woman trying to move things, but getting rather wet in the process.  They switched the water off straight away and called the plumber, but it took a while for all the water to come through the system.  I decided to leave everything just in case there were further problems.  When I went in on Monday morning I had to put it all back, but why is it that it never goes back in the same way, and you seem to end up with more stuff than you started with!

I have been meaning to say for ages now, that last year at Malvern we met a very lovely lady called Sue Phillips from Newport in Wales.  She is a longarm quilter and Debby sent a quilt to her. A few weeks ago she brought it back down to us and it is beautifully done.  We were really impressed, and we thought her rates were very reasonable, so if you are looking for somewhere to send your quilt tops, then her email address is school.house@btinternet.com.  If you are passing by the quilt is hanging up in the shop.

The magazine Somerset Life has done a feature on Wellington this month, and did a little interview with us.  There is the usual awful photograph of us, but the whole article is good, and amongst other things gives an explanation about how the Duke of Wellington got his name.

Finally Wellington this week is buzzing with the news that Mary Portas came to town!  Wellington has put in a bid for the High Street project which she is involved with.  Lots of people say she was here, one person even said that she had been into our shop, but I think Debby would have told me, and I certainly didn`t see her!  However until today I hadn`t met anyone who had actually seen her, in fact the person I spoke to hadn`t seen her either but her friend had!  Apparently she was looking outside the old Woolworths store - who knows!!