This week seems to have gone by very quickly, not quite sure why as I seem to have spent a lot of time not doing very much, but thinking I should.  I had my little op and was very impressed with my treatment.  I felt like a teenager when I got there as most of the others were quite a bit older than me - one man was 95!  There was one person younger than me and she said she felt like a baby - she was.  We were the only ones to have a general!  The consultant did tell me later that the younger you are the harder the eyeball and therefore the more difficult the operation is, so  she prefers to do generals in those cases.  (I am no spring chicken I might add!) I felt a little better, but not a lot!  Having had it done I now realise how bad my eyesight is in the other eye, but I have to wait a while to get that one done. 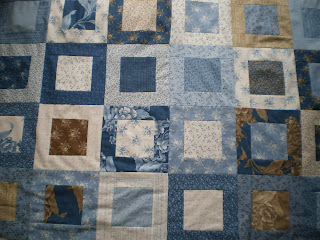 Enough about my eyes.  I did manage to complete a top for a layer cake workshop I am doing in a week or so`s time.  The colours aren`t my favourite, but I think it`s good to work in colours other than your favourites. I quite like the contrast between dark and light. I think the layer cake is called blueberry crumble.  I have made two more for the workshop which I have hand quilted, but I will endeavour to machine this one, although I prefer to quilt by hand.

I also completed a small quilt and matching cushions to go in the window.  No picture, but the quilt was made for a baby  from a panel and the cushions from matching fabrics.  Debby and I work had to change the shop windows and aim to do them about once a fortnight.  It can be quite a challenge at times because rather than just putting fabric in the window we like to show people what you can make with the fabric, but we don`t alway have time to make the things that we want to. We get lots of very positive comments, so that puts even more pressure on us!  I have brought home some fabric to make into children`s garments, as I don`t think a lot of people realise that the fabric we sell is ideal for making clothes.  I also have some denim and a range of Moda Feedsacks fabrics which go really well together, but somehow I am not feeling that inspired, I expect it will come in the end - hopefully for them to be completed in two weeks time! 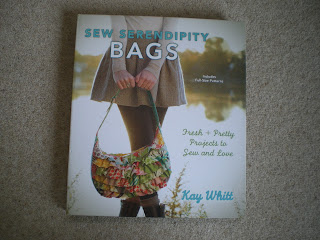 I think most of you know that I follow a blog called Stitcherydo.  Last week Shirley from Stitcherydo did a book review on a new book called Utility Quilting by Carolyn Foster, I then saw it mentioned on several other blogs, so of course had to order it.  It hasn`t come yet, but as soon as it does I will tell you all about it.  I also ordered another book called Sew Serendipity Bags by Kay Whitt.  I discovered this when a customer came in the shop with it.  This lady had seen the article about us in Sew Hip and had made a special journey to see us.  There are some really lovely bags in it, the patterns are included and lots of excellent instructions.  Hopefully I will show you a completed bag soon.  That has just reminded me that when I was in the North one of my cousins who lives in France, but was over to see her mum had a fantastic bag which she had made from a French pattern.  I am going to France in June, and what am I looking forward to the most - to buy some magazines, how sad am I. 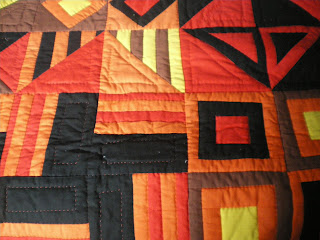 Whilst talking to Shirley a while ago she said she thought solids were going to be big news this year, and  I have noticed they are creeping in all over the place.  She sent me an email earlier this week to say have a look at a blog called Sew Create It.  The blogger who I think is called Sarah has challenged people to make a quilt using solids.  She gives lots of hints and tips about using solids and the whole thing is positively inspiring.  I dug out this quilt that I made years ago using solids.  I made it originally for when my son went to university, but then didn`t think he would look after if so said I would give it to him when he finished.  He then went off to work in the Far East and somehow or other he never got it and it`s beens stuck in a drawer ever since. I nearly sold it a couple of years ago, but couldn`t quite do it but I got it out to have a look at today, and thought you might be interested.

I am back in the shop tomorrow for the next 10 days or so.  Debby will be on her knees, and in fact when I have finished my class tomorrow morning she is not hanging around, but leaving the county immediately, she`s probably worried that I will find another reason to keep her there!

We received an email yesterday about a quilt exhibition at the South West Craft Centre, Church Lane, Tavistock.  The quilts are all made by a lady called Margrette Munro, and is open until 24th March.  Tavistock is a great little town on the edge of Dartmoor - my husband and I alway used to say we would like to retire there!  If you get a change go and have a look.
Posted by Dotty Dolly at 14:48