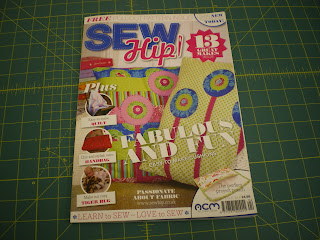 Time for another post, I am back from the frozen north as my husband calls it, but actually it was really warm for a change!  It was so nice to come back and see Sew Hip in the shop window with our cushions, and to read all about ourselves inside.  Its even better to walk into the newsagents and see it on the shelves!  We have to brag a bit, so above is a photograph of the front of the magazine and below a picture of the `posh pants` bag also featured.  I have been making these bags for years, and they have always been popular. 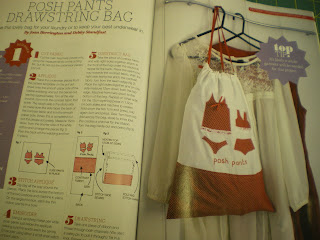 Back to last week Debby must be worn out, although it was her week for working last week, she had a workshop to run, the evening class on Wednesday and my class on Thursday morning.  I have had a workshop today so she has been in again, and then on Thursday I am having a cataract removed from my eye, and being the coward that I am, I am having a general aenesthetic (don`t think I`ve spelt that right!).  I really cannot bear the thought of someone messing around with my eyes, and I know I wouldn`t keep still.  That`s another couple of days when I won`t be around.  I think she is still speaking to me, but if any of you come in the shop and see her in a huddle on the floor, it`s probably because she is so exhausted that she has fallen asleep.

Today we have had an applique workshop called Farmyard Heaven.  I think we all enjoyed ourselves, I certainly did.  Although none of the work was completed everyone was well on the way.  Everyone appliqued the pieces by hand, and by the end of the day were ready to put their borders on and start quilting. 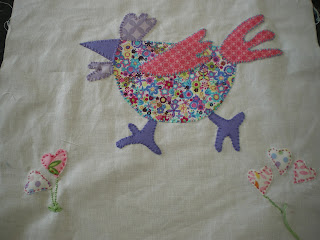 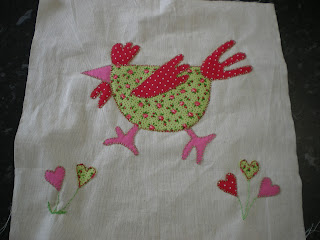 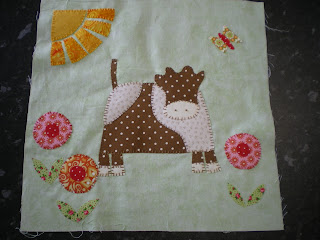 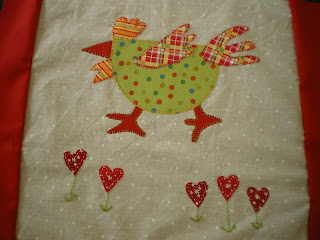 It was a small class as a couple of people had to drop out at the last minute, but we decided it was cosy!  I love the colours, it never ceases to amaze me how different they can all look.

Debby and I are now working out dates and themes for our next workshops from May onwards, it`s never easy trying to think of themes that will appeal to people, but we have a  few ideas up our sleeves.  Then of course we have to make the samples, there never seem to be enough hours in the day.

Last Friday I went over to Radstock with Shirley from Stitcherydo, we went to see a quilt exhibition at the museum.  We took ages to get to the museum  as once we got to Radstock it felt like they were digging up the entire town and the queues were terrible.  When we finally got to the museum we discovered it was only open in the afternoons.  We decided to go over to Frome which was only about 10 miles away.  For those of you that don`t know Frome has turned into quite a trendy shopping centre, particularly if you are into vintage.  There is a little street called St. Catherine`s Hill, and the shops are great.  I spent a small fortune in a lovely wool shop called Marmalade Yarns, and then Shirley spent some too. If you get the chance I would thoroughly recommend a visit.  We had a nice lunch and then went back to Radstock which took some time.  The traders must be going mad.  The exhibition was very enjoyable and as usual very inspiring.  I particularly loved the older quilts on show.  The museum itself is a good place to visit, and the staff, all volunteers are very helpful.  It is a charity so there is a charge, but well worth it.

Thats it for another week, so happy stitching!